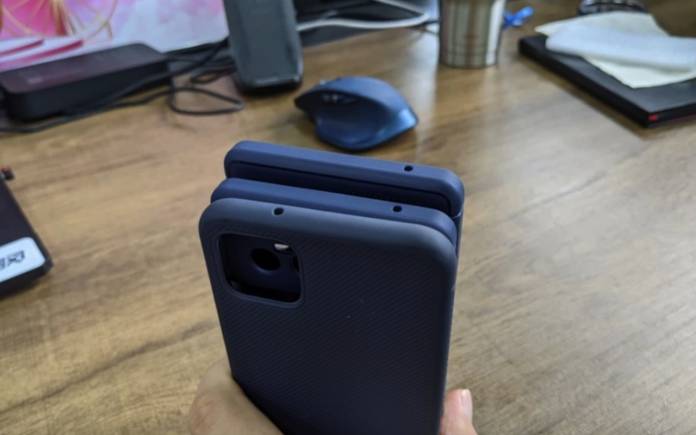 The Pixel 6 series is now highly anticipated. Google’s next-gen Pixel phones will feature a new design as shown off by several renders. The tech giant usually releases its flagship offering in the second half of the year with the latest Android OS version. Just yesterday, we saw protective phone case renders that surfaced on the web. We heard they would use the same GPU as the Huawei Mate X2 and Samsung Galaxy S21. The phones may also offer Ultra-Wideband support.

New images of the Google Pixel 6 and 6 Pro are ready. Well, they really are just photos of the phone cases placed side by side with the Pixel 4XL. The photos tell us the possibility of a zoom camera and a huge design change in the Pixel phone family.

Google has designed the Pixel 6 and Pixel 6 Pro with a new camera module. The camera system placement is different this time. It looks more like a bridge running across one edge of the phone to the other.

Looking at the photos, the camera module is really on a vertical orientation. It looks like a bridge on the upper portion of the rear panel. The difference between the two is that the bigger phone, the Pixel 6 Pro, shows an extra hole which could be for an additional camera–maybe that rumored 8MP telephoto aside from the 50MP sensor + wide + ultrawide.

The Pixel 6 sits beside the Pixel 4 XL and they seem to be of the same size. This means the Pixel 6 Pro is even bigger than the previous XL model.