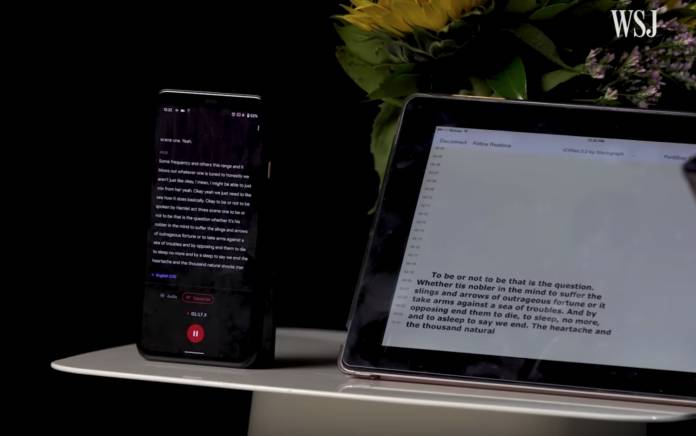 One of the things that Google is harping on about the Pixel 4 device is that a new built-in app called Recorder will transcribe audio in real-time and on-device. The Wall Street Journal decided to test out this live transcription app and put it in real-life challenges like coming face to face (or ear to audio) with the one of the world’s fastest talking women, Frank Capo. They also tested it out against four people with different accents. Plus, it had to go up against a really fast courtroom stenographer.

WSJ’s Joanna Stern conducted the test which pitted the Pixel 4’s Record app against stenographer Anita Trombetta who can type 260 words per minute. They got Capo as well as four random speakers from New Zealand, Ireland, Jamaica, and Germany. They got all of the readers to read the “To be or not to be” part from Hamlet, part of Google’s privacy policy (which we barely read anyway), and of course, an article from WSJ themselves.

The test results were pretty impressive, as per Ms. Stern and from the video itself. It was able to give the stenographer a run for her money even though they both did miss a few words here and there when reading the prepared materials. Even when the people with different accents read from it, it was still good enough. It only encountered a few snafus when Ms. Capo recited Three Little Pigs, but that was just a warm-up.

Aside from the accuracy reflected in the test, one of the more impressive things about the recorder feature is that it can do all that real-time transcription even if you don’t have an Internet connection whether it’s Wi-Fi or your phone’s cellular connection. However, this is of course only available in the Pixel 4 for now. She did suggest downloading a similar app called Otter, but it is apparently not as accurate as Google’s.

Both the Pixel and the Pixel XL have gone on sale already starting at $799. No word yet on whether the live transcription will be available in other Pixel devices or later on, even in other compatible Android smartphones.