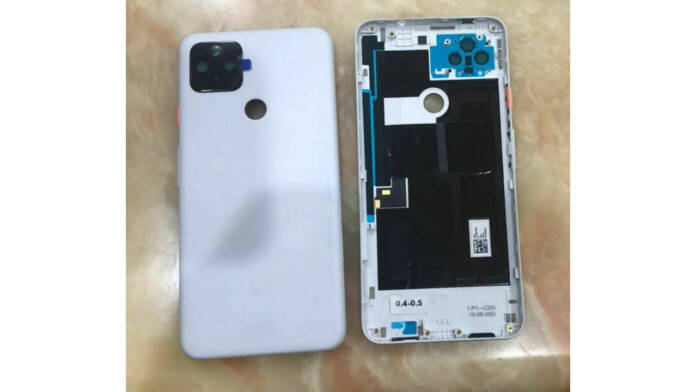 Google’s mid-range $399 Pixel 4a is going to be a single plastic-bodied 5.81-inch smartphone with an OLED FHD+ display. The single 12.2 MP main camera and 84-degree field of view 8 MP selfie shooter is average considering the mid-range market loaded with tripe and even quad-camera setups in this price range. So, is Google going to have a Pixel 4a XL version with a better camera setup? Well, yes they were going to do that but the model has been scrapped before final release.

The reason for dropping the bigger version of Pixel 4a will never be known, yet we can at least get a sneak-peak as to how it would have looked. According to an eBay listing “Google pixel 4a XL Replacement New Battery Back Cover Door” from a seller in Shenzhen China, the phone was going to feature a dual-camera shooter.

The back panel in Barely Blue color also has cut-outs for fingerprint sensor and a slot for 3.5mm headphone jack on the top. Images show cut-outs for microphone and the spectral/flicker sensor which is missing in the Pixel 3a. Significantly, there are three round cut-outs suggestive of a dual camera module with the third one for flash.

It’s not surprising to see a phone model under development being ditched for some reason. This back case cover confirms that the phone was agonizingly close to making it to the final line-up of Pixel phones this year. Should Google have continued, it’s anyone’s guess!