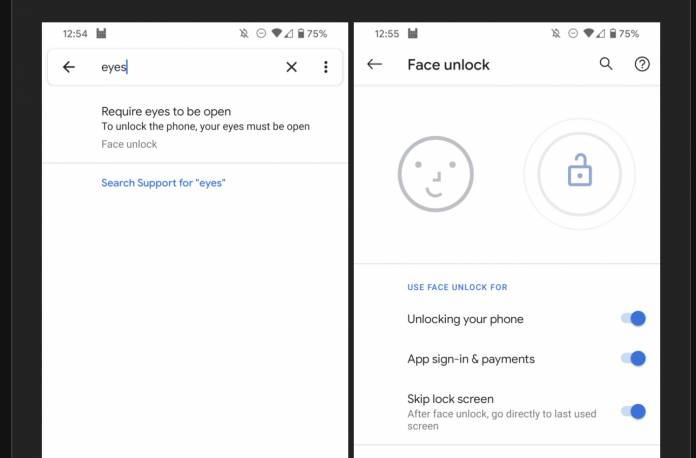 One of the major criticisms about Pixel 4 is the fact that you can use the Face Unlock feature even when your eyes are closed. It brings a lot of security risks as nefarious elements can find ways to unlock it without your knowledge. It’s taken them a long time but now users are seeing a “require your eyes to be open” option in your device’s settings. While you can already see that mode, apparently it’s still not working as it should.

Since Pixel 4 was launched earlier this year, Android Police says there have been several monthly patches and even two major Feature Drops. However, it’s taken them this long to bring something that should have been there in the first place. And the fact that it’s still not working properly must be a cause of concern for users. And it’s not like a feature that’s nice to have but a necessity to keep your phone secure.

You can search for “eyes” in your Pixel 4’s settings and once you find it, you’ll see an explanation that your eyes have to be open so you can unlock your phone, even though the name of the option is “require eyes to be open”. But when you tap it, it will take you to the regular Face unlock screen and you won’t be able to find and enable the settings. So this means that you can still keep your eyes closed, if you feel like doing so when unlocking your phone.

The dangers of this is pretty obvious as someone else in your house can wait until you fall asleep to unlock your device without your knowledge. It can also be used to unlock dead people’s phones, although that may be too morbid or for an episode of a crime procedural. In any case, it’s just all around bad for Pixel 4 devices to have this security flaw.

As to when “require eyes to be open” will actually work, that is still unknown. Early leaks of the Pixel 4 actually had this already but somehow in the process, Google removed it for some reason. Let’s hope they bring it back for real this time.