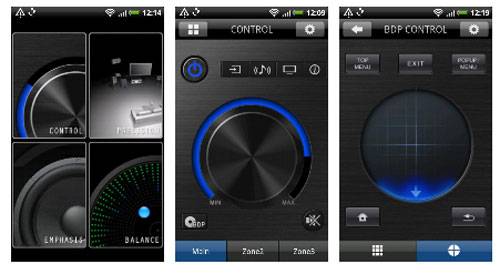 If you are an Android user that has Pioneer home theater or audio components in your home the company has announced it previously iOS only app is now available for Android. The app is called iControlAV2 and is a free download. The app will only work with compatible gear and the full list of compatible products is on the Android Market app page.

The app does require Android 2.2 or higher device to operate. If your receiver and Android device is compatible the app allows you to control all sorts of functions of the app from across the room including volume, bass, balance, and room settings. You can change inputs and control the volume of individual components as well.

Receivers with the ability to be controlled by the app are available now starting at $549. The app will not work with any Pioneer devices launched before March of 2011. Android devices the app is confirmed to work on include the HTC Desire / HTC EVO 4G / SAMSUNG GALAXY S / MOTOROLA DROID X. The app requires a wireless network to operate and the receiver needs to be web connected via WiFi or Ethernet.