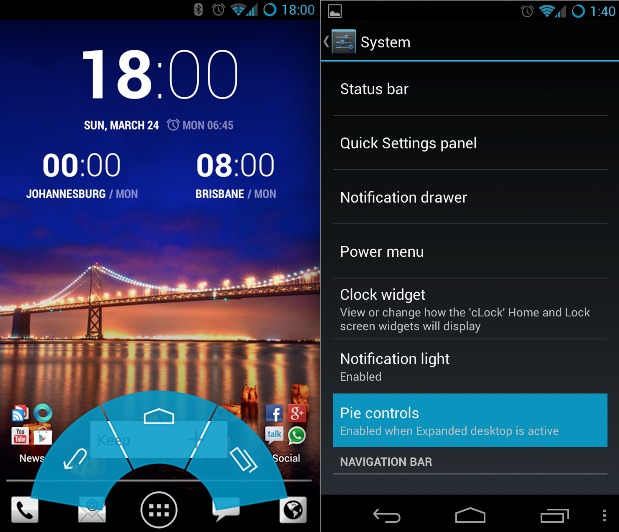 The folks from CyanogenMod took to their Google+ page earlier today to announce an awesome new feature that is now available on many CM10 nightly builds. It’s called Pie Controls, and is popular with many Android ROM’s, especially Paranoid Android. We first saw Pie Controls in the now replaced stock browser in Honeycomb, but starting today they’ll be available in a completely different way.

As you see above, Pie Controls are the navigation buttons we’re use to seeing on our Android smartphones, only they will be hiding and only appear with a swipe or gesture from the edge of your smartphone. If you’ve used Paranoid Android you know exactly what this is. For those that think on-screen navigation keys only waste screen space, this feature is completely for you.

Using Pie Controls you’ll be able to hide those pesky navigation buttons and use that entire HD display on your Galaxy Nexus, Nexus 4, or any other device with on-screen controls. Then when you need to navigate home simply swipe up from the bottom (like we do with Google Now) and the Pie Controls will appear for easy access. The CM crew has also added a clock, battery information and more to the pop-up keys, and you can move them to wherever you see fit too.

The controls can be on the top, bottom, left or right and obviously is highly customizable. Make sure you head into settings and enable Pie Controls, then under Power Menu enable expanded desktop. From there you’ll be able to hide the navigation on-screen keys and enjoy this new feature and that added screen real estate. It was merged last night so should be in the latest CM10.1 nightly build of choice soon. Enjoy!