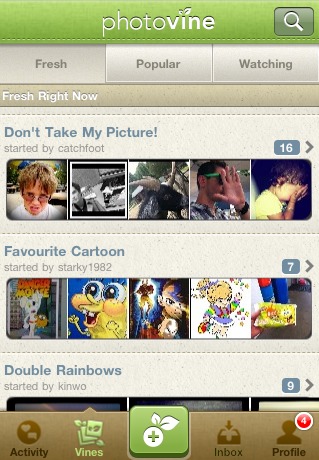 It’s that time again, ladies and gentlemen, time when we’ve got to ask Google what the heck is going on, this time regarding a pretty awesome little social photography app by the name of Photovine. I just happen to have an iPad here, so I went ahead and checked the app out for all you non-adventurous types. Of course I was still working on the tiny iPhone-sized interface unless I wanted to have a pixel nightmare in front of me, so it was slim pickins for screen real-estate. Even so, Google’s excellent new app Photovine’s sweet nature shown through, and it’s gotten me wondering why the heck it wasn’t launched on Android instead of iOS.

Now there’s no way (or is there?) in the world Google isn’t going to be pushing this app to Android eventually, but the question remains: why start with iOS and not give its own mobile OS any love? This app connects you with friends across the universe via Vines – each Vine is a word or phrase, each photo added to a vine should have something to do with said word or phrase. Of course you can guess that there will be some loopholes and very possible inappropriateness going on in the future more than likely, but for now everything remains cute.

Google! How could you?! We want this super fun to use simple, neat, great, nice app for Android too! At least you’ve got to consider bringing it over to Android sooner than later. We don’t want to be late to the party! Meanwhile we’ll have to (SHHH) break out our significant other’s iPad or iPhone (perish the thought) to take a look while we wait.