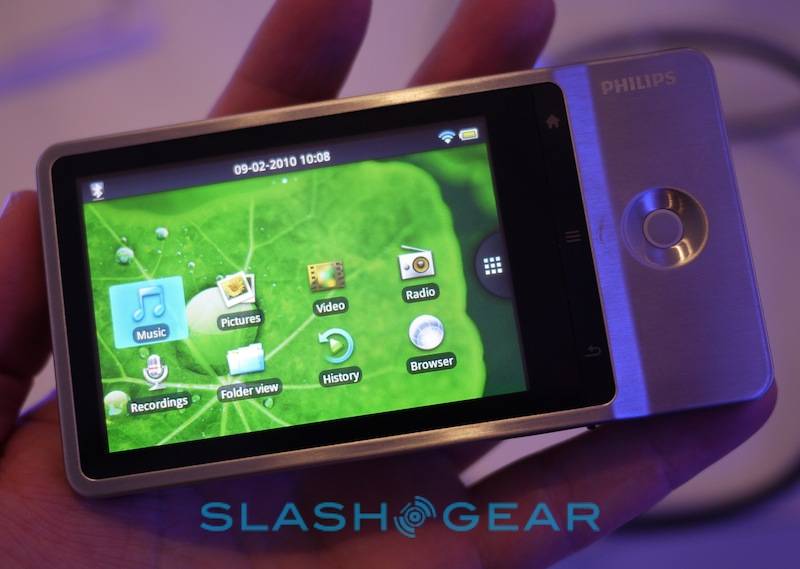 We have gotten a chance to get our hands on another device at IFA-2010, which is a PMP player by Phillips called the GoGear Connect. First we will start by saying we are not quite sure why Phillps did not go ahead and make a phone out of this, maybe that is the next step for them. The PMP player is very much competition for the iPod Touch and the Zune and looks like it will be very competitive with both devices.

The device features a 3.2 inch capacitive display (lacking mulit-touch) and has storage options of 8GB, 16GB, and 32GB, along with an SD card slot that will support up to 32GB also. Should be great if you have a lot of music, you could have 64GB of storage if you wanted. The GoGear Connect will have full access to the market and runs Android 2.1 with Phillips media software, and is said to be upgraded to 2.2 in the near future. It will connect to the internet with Wi-Fi b/g/n, has Bluetooth 2.1 and USB 2.0, also included is a 2 megapixel camera that will shoot pictures and video

There is a speaker and microphone incorporated in that should allow you to make VoIP calls if you would like. GPS is available with Google Maps but does require an internet connection, so that would force you to tether the device if you wanted to use it for navigation on the go. The device seemed to be pretty snappy with a little lag here and there, and a crash or two, but these are demo units and that is to be expected.

A trackball was included in this device, which is something we do not see a lot of anymore, and looks very nice with its aluminum outfit it wears up to the screen. Pricing for the player is set to start off at €249 ($320) and is a little pricey we were thinking. We will surely get a review unit and have more hands on info for you, but right now go ahead and check out the hands-on pictures and video.