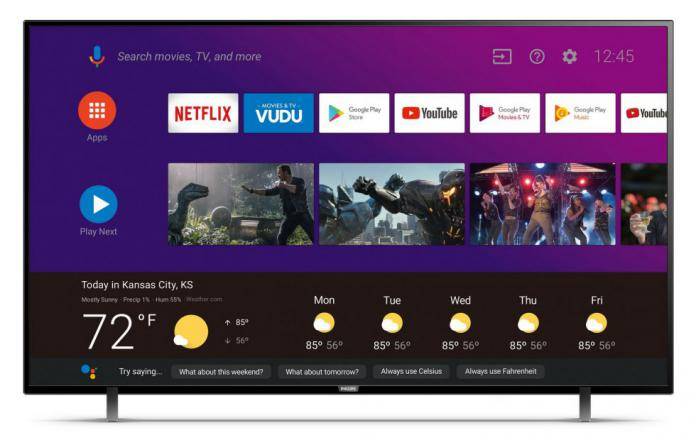 The flood of news has started as the Consumer Electronics Show in Las Vegas starts in a few days. If you’re interested in smart TVs, you’ll be glad to know that Philips is finally releasing 4K TVs in the US that will run on the Android TV platform. Funai, their marketer in the US announced that they will be exhibiting the two series of the Philips 4K UHD Android TV, the 5704 and 5904, at their booth during the CES. However, only the 5704 will already be available in select markets while we have to wait for the other to be released later this year.

Both series of TVs will be running on Android TV and will come with Android 8.0 Oreo out of the box so you’ll also be able to access apps and games on the Google Play Store. Each series will have 5 screen sizes namely 43, 50, 55, 65, and 75-inches. They also have near-field microphones so you’ll be able to access your Google Assistant from your TV and ask it to do things that it usually does like answer queries, add appointments to your calendar, access your email, tell you about the weather.

Of course the major reason why you probably bought a smart TV in the first place is to stream shows and movies from your favorite services. You can use the remote to browse or Google Assistant itself to help you out. The TVs also come with Chromecast support. So if you need to mirror your phone to the TV, whether it’s to do video calls, view pictures from your phone, or stream content from there, you can now do so without needing any external device attached to the TV.

The 5704 series pf the Philips 4K UHD Android TV is already available through select retailers although they didn’t specify which. The 5904 series meanwhile will be released in the second half of 2019. One of the differences between the two is that the latter will probably be more expensive since it also has a far-field microphone so you can use Google Assistant at a farther distance.

Both series will be available at the Philips booth during the CES trade show in Las Vegas which starts by January 9 and will run up to January 12.