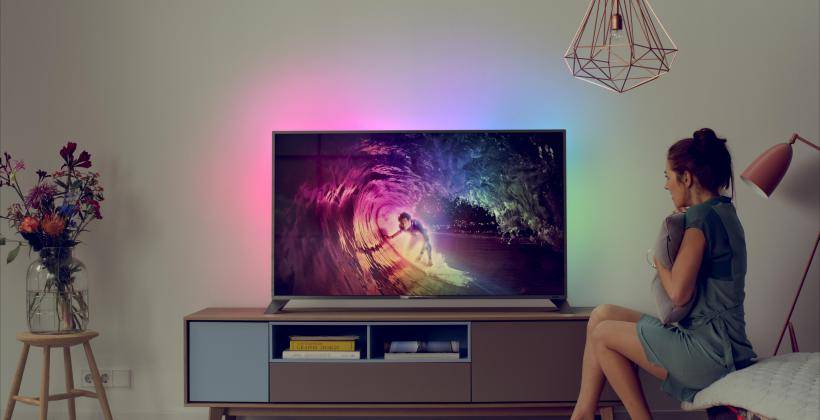 Our home entertainment systems and mobile devices are all converging in more ways than one. While gadgets like the Google Chromecast aim to bring the mobile platform to TVs via an addon, Philips is taking Android and putting it right in the very heart of its 8000 series of smart TVs.

Smart TVs that run Android aren’t actually that new, but Philips is advertising the 8800 series, particularly the 8809, to be the first one with an Ultra HD display. That’s a resolution of 3840×2160 pixels, all crammed in a large 55-inch. Those who might not want something that much can also opt for the 8109 and 8209, both of which come with only a 1920×1080 resolution, in choices of 48 or 55 inches. You also get Philips’ Ambilight technology, which projects colors behind and around the TV to match the display, the mood, or even your room.

Aside from the display, the highlight of these TV sets is, of course, Android. With access to the entire gamut of apps and services from Google Play, as well as Google Chrome browser, users will not run out of things to do or play. The quad-core CPU on the 8109 and 8209 and the hexa-core processor on the 8809 ensure a smooth gaming experience. Add to that Philips’ own Smart TV ecosystem and you’ve got the makings of the ultimate entertainment appliance. But by themselve, the 8809 and its smaller siblings are Smart TVs in their own right, offering features such as gesture control, voice recognition, remote control via smartphones or tablets, screen mirroring, recording, and even dual channel display.

Philips has not yet revealed exact launch dates and pricing details for these TV sets powered by Android 4.2 Jelly Bean. The manufacturer will be initially targeting European and Russian markets by the second quarter of 2014. US availability has not yet been announced.