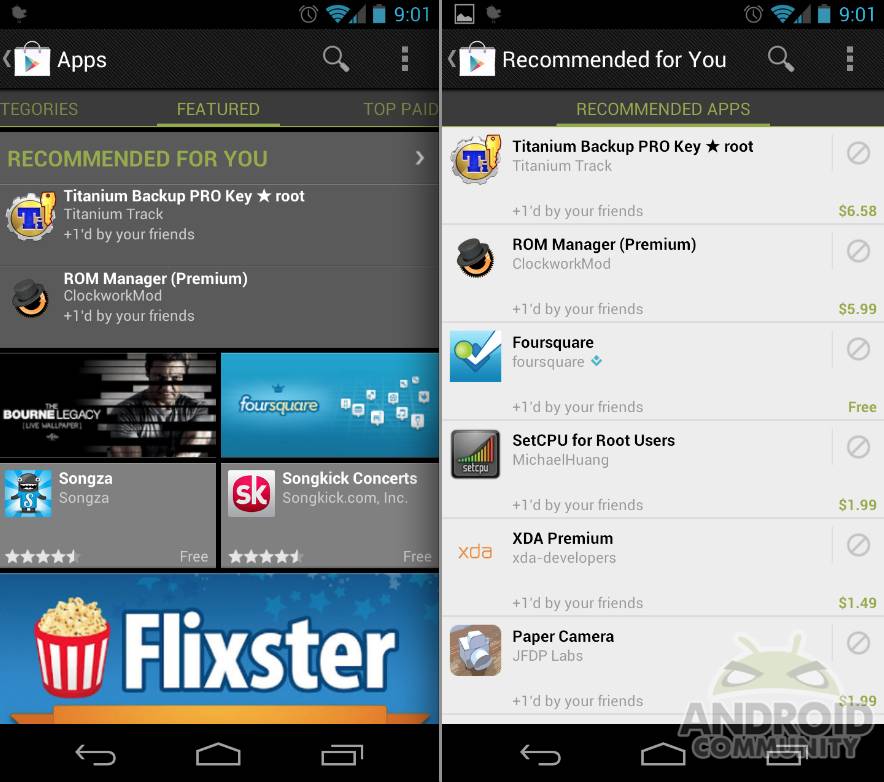 Hey, that’s new! Yesterday Google rolled out another neat new feature for their ever growing, expanding, and maturing Play Store for Android. They’ve been busy with it as of late but today we now have a “Recommended For You” app section that should help with app discovery. It’s a welcomed change so lets take a look.

Now how this exactly works and its algorithm isn’t completely known but Google’s been giving personalized results in the Web Store for a while already. Add in their knowledge of search and you get some seriously impressive results. The Recommended for me list was so accurate it was almost scary.

To see this yourself just go to the Google Play Store and hit the Apps tag, then slide over to featured and you’ll see it. Once expanded the Recommended For You will have a huge list of apps based on your previous downloads or searches, it shows things similar users have downloaded, apps friends from Google+ have +1’d, and even apps local to you. It’s so accurate I was pretty amazed.

This is app discovery at its finest. This has been a growing issue with the hundreds of thousands of Apps in the Play Store and this appears to be an excellent first move by Google. So far I haven’t found anything that blew my mind, but looking through the list was quite entertaining. If the app is of no interest, just clear it by hitting the little “no” symbol. Sadly it shows lots of apps I’ve uninstalled previously, as well as currently installed apps. If those would be hidden with a smarter system and Google let me filter recommendations by paid/free then I’d be completely happy. Check it out yourself guys!