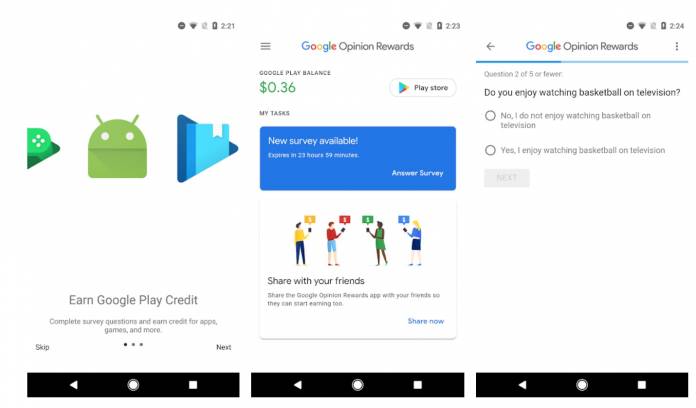 If you’ve been answering some Google surveys and turning them into usable Google Play Store credits through the Google Opinion Rewards system, you might want to check now if they’re still there. There are several reports of users finding they’ve lost their rewards or that they suddenly expired even though the expiration dates are supposedly still a year ahead. There doesn’t seem to be a rhyme or reason to this and Google has not responded yet to inquiries about it.

According to an article on Android Police and several posts on Reddit, a lot of users have reported losing the credit they’ve earned through the Google Opinion Rewards app. Some have even claimed double digits loss including a Reddit user who said his $63 “vanished” without any warning. Some have said that the expiry date for their credits have somehow “jumped forward in time” by months.

This isn’t actually the first time there has been an issue with the expiry dates but previously, Google said it was just a bug. This time around there hasn’t been any feedback yet as to why this is. If you have some credits that you know are expiring soon, you might want to spend several dollars on the Google Play Store in order to possibly push your dates back. Your Google Play credit may be following a “first in, first out” logic so you may want to try and buy an ebook or rent a movie to possibly push the date out.

The Google Opinion Rewards is actually a pretty good way of earning a few dollars without giving too much effort. You can just answer some targeted surveys and let Google or third-party users get this data in exchange for “cash” that you can spend on apps, books, movies, games. So this issue of the disappearing credits is sort of a big deal especially since there is a “cost to privacy” in some of these surveys.

Google has yet to respond to Android Police’s inquires in this matter. The aforementioned Reddit user says that Google refuses to reinstate the balance so that’s $63 down the drain.