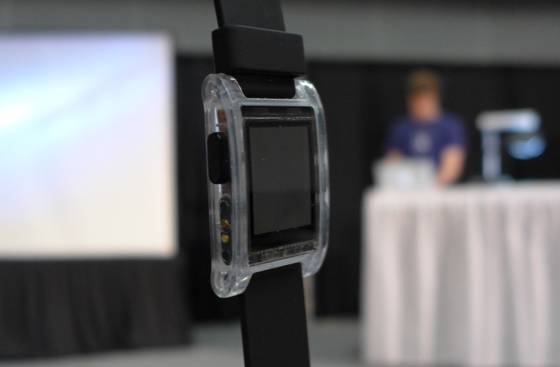 The long awaited Pebble smartwatch shipping date has been announced. In short, the Pebble will begin shipping on January 23. According to details coming from the Pebble press conference, the watch is currently in mass production and that means they are able to push out about 15,000 per week. So far so good, but keep in mind, Pebble had quite a few Kickstarter backers.

This means that Pebble will need about 6-8 weeks to get the watch into the hands of all Kickstarter backers. That translates into all backers getting their watch between January and late-March. Once all the Kickstarter units have shipped, the watch will make its way into the hands of those who placed a pre-order on the getpebble.com website.

Otherwise, in addition to the shipping information, the folks at Pebble offered some detail on the watch. Some of those goodies include an e-paper display that is sunlight readable and a battery life of up to 7 days on a single charge. As for charging, Pebble announced that the watch will charge (using USB) over a magnetic cable. This, in addition to keeping the watch clean looking — allows for the Pebble to retain its water-resistant status.

The Pebble is made of a polycarbonate and also has a polycarbonate lens to protect the display. Other bits that were mentioned include the watch having a standard 22mm watch strap, Bluetooth 4.0 and something that was previously unannounced — an ambient light sensor. Finally, getting back to the shipping date, it was said that you should be on the lookout for an email notification which should arrive one week before your Pebble is expected to ship.