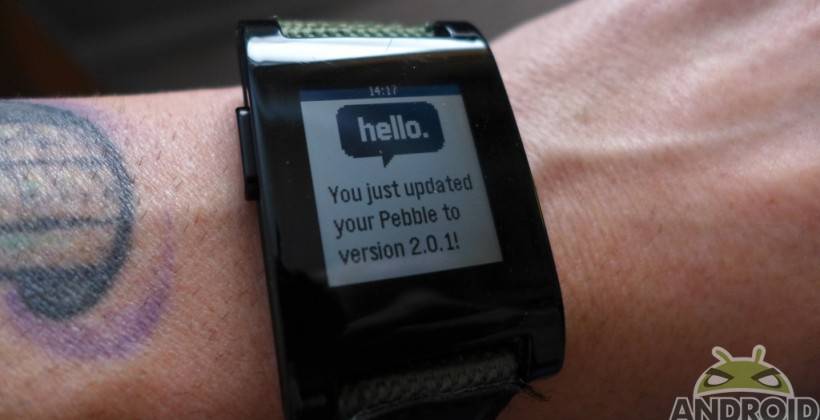 Pebble 2.0 arrived for Android earlier in the month. Of course, that meant not only an updated Android app for the Pebble, but access to the Pebble appstore. We suspect most Pebble users have already picked their favorite apps, and such is the case with us. Here we are sharing our top five favorite Pebble apps, and also looking for some suggestions for new apps.

Before we get into those five apps, we did have to point out one interesting tidbit. A fair amount of our top fives are apps that we had been using in the past, as in before the official launch of the Pebble appstore.

This one will really only be beneficial for current Evernote users. Or maybe as an added perk for those considering using Evernote. This app allows you to view your notes on your wrist. There is also a variety of options for finding those notes; such as by Notebooks, Reminders, Checklists, Tags, and more. While this may be a bit difficult for some to manage using the small Pebble display, one trick we found useful was to tag notes we knew we were going to access on the Pebble — with “pebble” as the tag.

Get Evernote from the Pebble appstore.

Another simple, but rather useful app. We tend to leave our phone on silent most of the time as our alerts are all sent to the Pebble, but there are times when we want the phone to make a sound. That is when the Phone Ringer app comes in useful. This one allows you to toggle your phone between silent, vibrate and sound.

Get Pebble Phone Ringer Switcher from the Google Play Store.

This app works in conjunction with an app on your phone and with the accelerometer on the Pebble. Sleep for Android is a smart alarm. That is to say it should wake you (with a vibrating alarm) at an optimal time based on your sleep patterns. The app also allows you to snooze and dismiss alarms from the Pebble.

Get Sleep as Android from the Google Play Store.

The RunKeeper app doesn’t allow for any control over your smartphone, but it does provide a helpful second display that can easily be seen during workouts. You’ll need to begin by launching RunKeeper on your phone and then from there your Pebble will display key stats to include the elapsed time, total miles and average pace.

Get RunKeeper from the Pebble appstore.

As mentioned, this is one of the Pebble apps we had been using for quite some time now. And truth be told, the functionality from some of the newly available watchfaces have replaced some of the need we had for Canvas. Still, we like the app and feel it should be mentioned. Plus, we suspect others will still find plenty of value. That being said, Canvas for Pebble allows you to build dynamic watchfaces.

Get Canvas for Pebble from the Google Play Store.