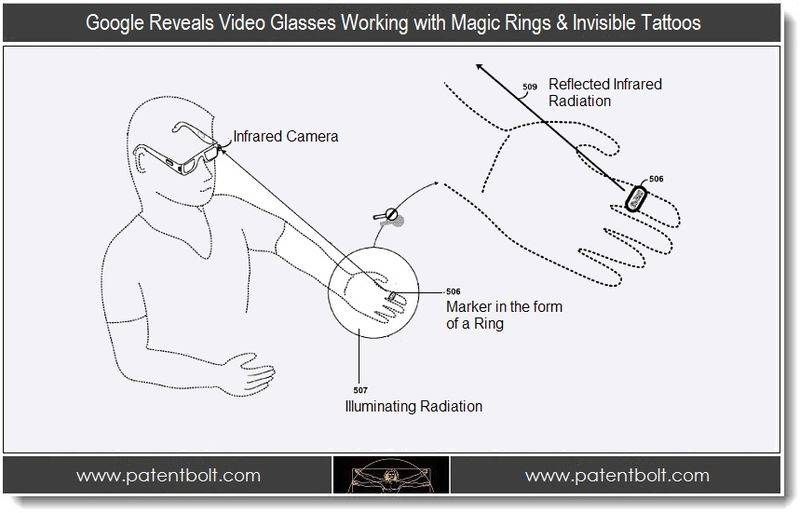 So Project Glass might not live up to the rather lofty expectations set by the preview video. But there’s no denying that it’s an awesome idea, and even if it flops like a one-winged seagull every geek who’s ever seen The Terminator wants to try it out. In addition to patents for the basic concept, Google has added some interesting control ideas, spotted by Patentbolt. The basic idea is that visible patterns or objects on a users’ hands could be used to access the user interface in the heads-up display.

Google’s patents describe rings, fingernails or “invisible tattoos” (infrared) that are keyed into the Project Glass system. The glasses then use the built-in camera to “watch” for commands based upon pre-defined movements, not unlike Microsoft’s Kinect. More complex movements with multiple markers (like a ring on each finger) could be used for more complex commands. There’s no connection between Project Glass and the objects in question – they’re simply used as points of reference, kind of like the base image in an augmented reality app.

The applications for this idea seem pretty straightforward, but there’s definitely some fun to be had. Say you made an augmented reality game based on Spider-Man’s web-slinging ability. The command to launch the game would obviously be placing your middle and ring fingers on your palm while the rest are outstretched. You could launch the dialer app with the good old-fashioned Inspector Gadget cell phone pose, or start recording video with the director’s universal sign for a letterbox frame. 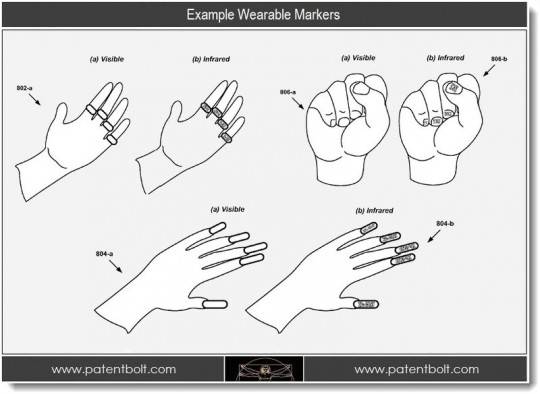 Of course all this is just conceptual at the moment, and we’ve seen no indication that Google intends to add this functionality to glass. As of now all the controls are based on voice and head motion. Even if Google does use them, current motion tracking technology has actually progressed beyond the need for physical markers. Even so, I’d like to see something like this eventually, whether it comes from Google or someone else. I want to be able to abruptly hang up on somebody by using a certain universal hand gesture.