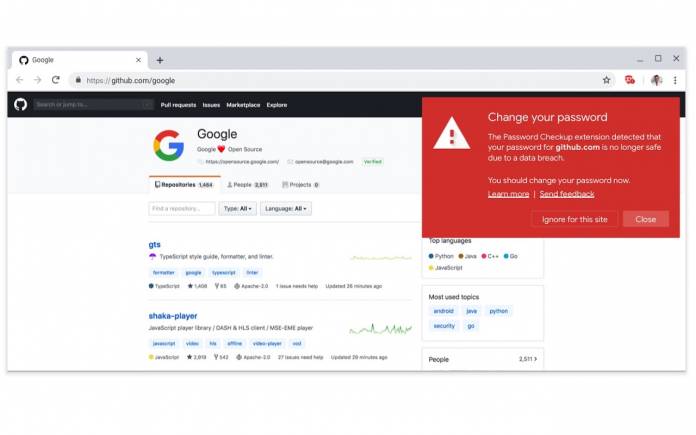 The Password Checkup extension for Chrome was introduced earlier this year. It was released to help secure most online accounts from hackers. What happens is the extension shows a warning when you get inside a site that uses one of the four billion passwords and usernames that are unsafe according to Google. A data breach has been reported earlier, caused by a mystery third party. Google wants to help by making Password Checkup as a built-in feature of Chrome. This way, online accounts are safer than ever.

The first release was only an early experiment and Google is proud to share about 650,000 people joined the program. Twenty-one million (12M) usernames and passwords have been scanned. Only 316,000 have been flagged as not safe.

The Password Checkup has been updated with new features. Several improvements have been made in response to the issues encountered by early users. Some results of the study will be shared here for your information.

The tech giant has shared hijackers attempt to sign in to websites where credentials have been exposed by a recent breach. The lesson here is to make passwords unique as much as possible for all accounts.

Many people are said to reuse unsafe or breached information. It’s a fact for a lot of people even for some sensitive accounts. The problem persists especially on shopping or entertainment websites. Other important findings: about 26% of user opt to reset their unsafe passwords recently flagged and 60% of new passwords become more secure against guessing attacks.

The Password Checkup now includes a direct feedback mechanism where users can send feedback or any other problems. A quick comment box is now available. Another feature provides users more control over data, allowing them to opt-out of any anonymous telemetry.

The idea is that Google never learns or remembers your username and password. Users are given the option not to share important information about them. The improved Password Checkup extension will keep all online safe from hackers.