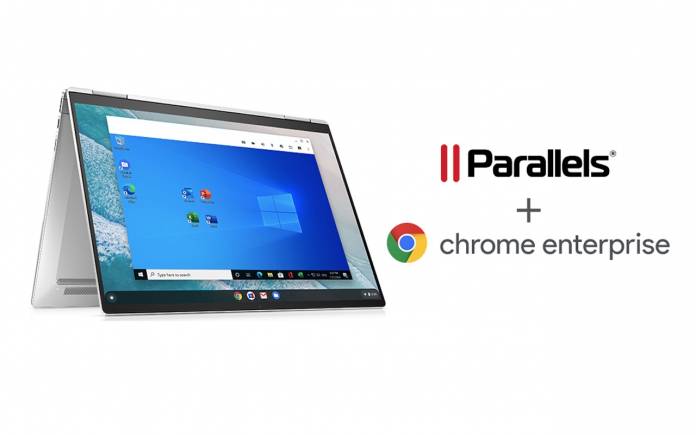 The term ‘Parallels’ has always been associated with Microsoft Windows. In the early days, it’s the one that allows Windows to run on Mac. It has since been upgraded with more features and functions. It’s now expanding to a new platform–Chrome OS. Parallels Desktop for Chromebook Enterprise has just been introduced and is now available. If you have your Chromebook and would like to try running Windows, you can do so now with the first software in the world that runs Windows directly on Chromebooks.

At the moment, it only works for enterprise Chromebooks although we don’t doubt regular Chromebooks with minimum specs requirement can also run it in the near future. With Parallels, full-featured Windows programs can be enabled. Apps include Microsoft Office and other proprietary apps. With the software, they can run even when there is no Internet connection.

Chrome OS and the Google Admin console integrates Parallels Desktop for Chromebook Enterprise. This means your company’s IT guy can easily and securely set up the system.

Google’s Chrome OS Vice President John Solomon is proud of this move. He shared: “Chrome OS is increasingly being chosen by modern enterprises, either for remote work, hybrid, or in the office. We are thrilled to partner with Parallels to bring legacy and full-featured Windows applications support, through Parallels Desktop for Chromebook Enterprise, to help businesses easily transition to cloud-first devices and workflows.”

Productivity with your Chromebook will be improved with the introduction of Parallels Desktop. It lets you “seamlessly run multiple operating systems and applications on any device” according to Parallels’ SVP of Engineering and Support Nick Dobrovolskiy.

Other useful features are also available like copy-pasting text and images between Windows 10 and Chrome OS, saving Windows files locally on a Chromebook or cloud, and printing from Windows apps via shared printers on Chrome OS. You can also share custom folders, set dynamic screen resolution, choose Full-screen support of Windows 10, open Windows web links where you prefer, and associate Windows applications to open files on Chrome OS. You can also do the following: Suspend and resume Windows, use Chromebook mouse/touch/keyboard to work with Windows apps, Scroll and zoom, Play Windows apps’ sounds, and more.

Parallels Desktop for Chromebook Enterprise can be availed for $69.99 per user. It’s the annual fee but it already includes a full-featured one-month trial. Parallels is willing to offer a trial with five user licenses. More information HERE.