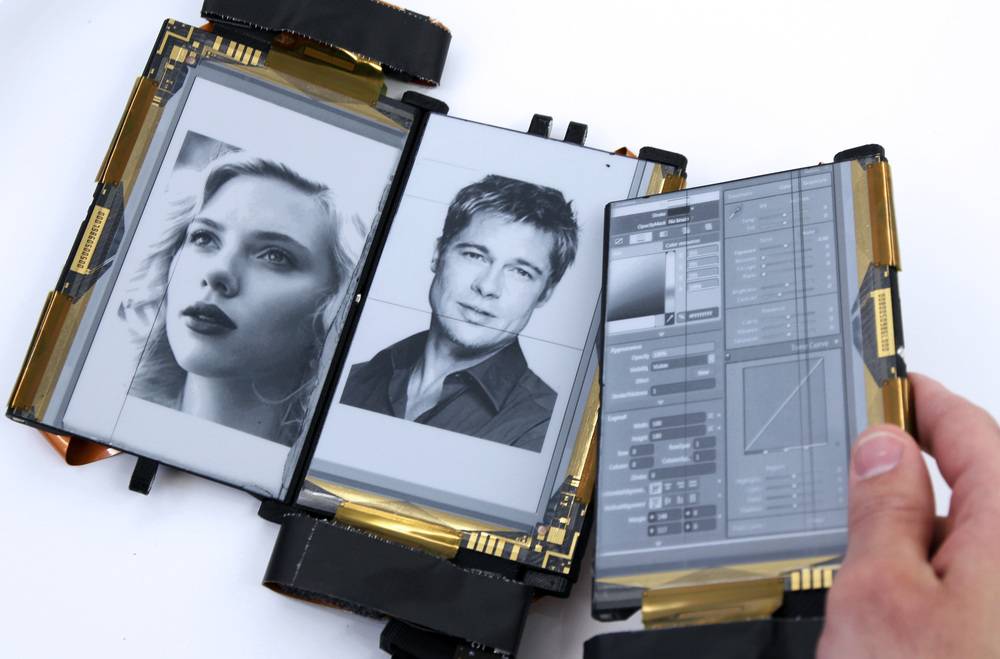 What if you had a smartphone that used power-saving e-ink display panels? What if you could attach and detach other similar panels, and fold them this way and that, and the smartphone interface would adjust accordingly? This is exactly the proposition that is being put forward by the Human Media Lab of Queen’s University with a prototype of a smartphone, if you could still call it that, called PaperFold.

It really looks like a device out of science fiction or cyberpunk, given how crude and unpolished it looks like. One can perhaps forgive how this prototype looks once you see how it works and of the myriad of uses this device can be applied to. The current prototype has three epaper displays that can function completely independent of one another. However, when snapped together, the user interface on the screen changes depending on how displays are attached. A two-panel configuration would have something like a photo gallery on the left and an individual photo display on the right. Attaching another panel adds some photo manipulation controls into the mix.

The magic continues when you realize that these panels can actually be folded accordion style, which also changes how the user interface functions. Prop it up like a laptop and you get a keyboard on one of the displays. A map being displayed on all three of the panels can switch into 3D view when the setup is folded accordingly. Of course, you can still use it, perhaps using only two panels, like a regular smartphone for calls and messages, albeit with a double-sided display not unlike the YotaPhone. The video below explains these features far better than words can convey.

Of course, PaperFold is just a prototype and part of a research project. Its existence is no assurance that it will ever become a commercial product, let alone a successful one, though the fact that something like Project Ara has come this far does make us wish it would. The demonstration uses Google Maps, leaving us hopeful that it would, or could, run Android, or at least something quite near to Google’s ecosystem. It might just be a moon shot, but it is definitely an interesting idea and a dream worth pursuing.