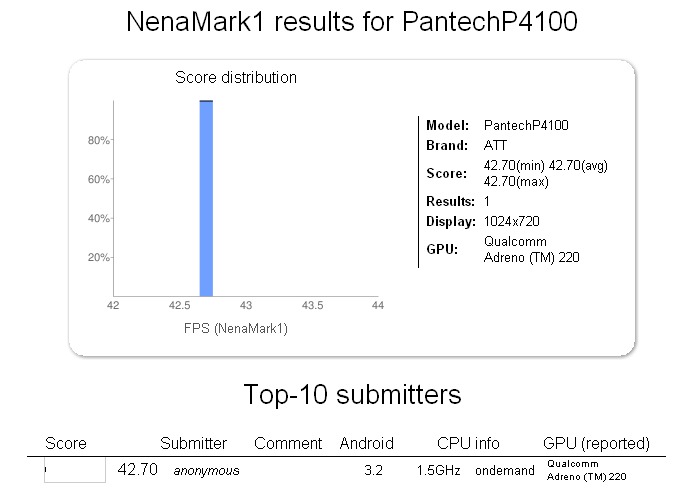 We have seen NeneMark benchmark results in the past that reveal all sorts of things and this should be no different. While some may say to take this with a grain of salt NenaMark has been pretty accurate with leaks such as this so far. What we have is an Android 3.2 Honeycomb tablet made by Pantech that seems to be around 7″ and possibly headed for AT&T. More choices are always welcome so lets dig into the details below.

Shown in the benchmark result above you have most of the details available for this unknown device. We haven’t heard as much as a peep from Pantech regarding any tablets thus far but seen here we have a 1024 x 720 resolution device and I’d say it’s maybe a phone with an HD screen but running Android 3.2 Honeycomb rules that out. So we have a 7″ Honeycomb tablet that seems to be rocking the same 1.5 Ghz dual-core Qualcomm Snapdragon processor found in the HTC Jetstream and the upcoming T-Mobile Galaxy S II Hercules.

Pantech recently released an LTE smartphone over on Verizon Wireless known as the Pantech Breakout so chances are this tablet could be powered by AT&T 4G LTE like the Jetstream. Shown in the leaked benchmark results as clear as day is AT&T for the carrier but that doesn’t give any indication as to whether it will have 4G LTE or not — we are just speculating as it would make total sense.

That’s it as far as details go. Hopefully we see some pictures of this 7″ Android 3.2 Honeycomb tablet coming from Pantech sometime soon.