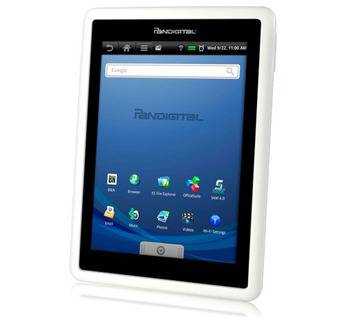 Look, we’re not recommending that you buy this $59.99 hunk of plastic. This listing on Ben’s Outlet is the primary example of the reason that a sale is not the same thing as a deal. But if you just want some (very) basic Android hardware to tinker around with, mod, abuse, destroy or maybe give to a young relative who won’t appreciate it, you could do worse than a Pandigital Tablet & E-Reader.

This guy is running Android 2.0. Yup, 2.0 Donut, with nary a Google app in sight. Other charming qualities include a 7-inch 800×600 display, “Samsung ARM 11” processor and a 1600mAh battery. It looks like the Kindle app is pre-loaded as is some kind of app store (though as noted above, it ain’t from Google). You also get such fancy extras as volume and power buttons, a virtual keyboard, a web browser and an alarm clock!

In one point of interest, it looks like Pandigital didn’t shell out for hardware buttons, so the nameless tablet is somewhat ahead of the curve with virtual nav buttons on the toolbar. Inside the package you get a wall wart, USB cable and a stand, which may or may not be made of cardboard. Hurry up, bargain hunters – there’s only 45% left in stock!