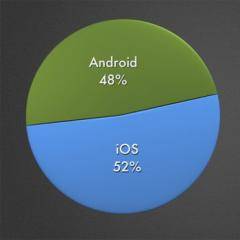 Any way you look at it, there are tons of apps on the Android Market and the iTunes App Store. Granted many of them are different copies of the same app or junk that none of us want anyway. Still, there are a million apps now released for Android and iOS combined. That is a very big number and it comes from Appsfire. Appsfire is a new app tracking company.

Appsfire does note that while a million apps have been released for both platforms, only about 80% of that number of apps is still available for download by users. The apps are split at a surprisingly close percentage between Android and iOS. Android has 48% of that million number and iOS has 52%.

The other thing with the numbers here is that apparently apps that are on both platforms have been counted twice. Take all of that into account and what it means is that there is probably considerably less than a million apps on the market. When you look at the number of junk apps out there, I wonder how many of these are apps that people actually use.