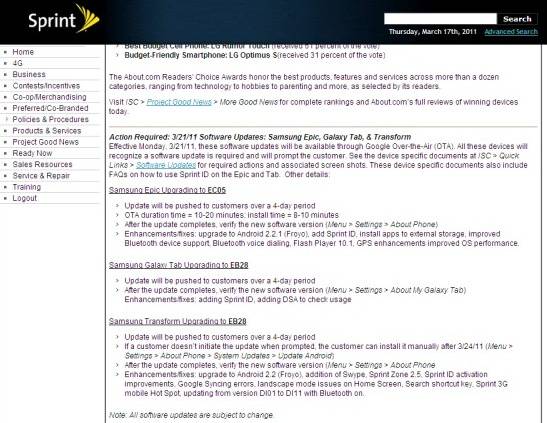 A pretty strong indication of an over the air (OTA) update to the Samsung Epic 4G, Transform, and even the Galaxy Tab popped up on the interwebs today in the form of a screen shot from Sprint’s website. The intended upgrades includes the Epic 4G moving up to Android 2.2.1 (Froyo) as well as some 2.2 yogurty goodness for the Samsung Transform. Even the Samsung Galaxy Tab joins the Epic 4G and Transform with a little nip and tuck courtesy of a Sprint ID update that will provide for a package of wallpapers, ringtones and apps to bring it up to where the current state of the art is for Sprint and Samsung.

The Spring ID concept, unveiled at CES last January, is ideal for users wanting to change the theme of their handset on the fly without having to do it piecemeal. In addition to the Sprint ID package, other additions include Flash 10.1 on the Epic 4G, and Swype on the Transform. These updates will be over the air (OTA) and will look to be scheduled for a March 21st roll out. Sprint recently suspended Android 2.2 (Froyo) updates to their Epic 4G phones after consumer complaints. It looks as if they’ve ironed out all those issues and are moving forward.

The Epic 4G has a brilliant Super AMOLED display to go with it’s slide out QWERTY, and 1GHz Hummingbird processor. Check out SlashGear’s Epic Review here. The Transform features a 3.5-inch HVGA touch-screen display, slide-out QWERTY keyboard, dual front and rear facing cameras and is powered by an 800 MHz processor. And the Samsung Galaxy Tab has recently enjoyed a nifty price cut to $199 along with free activation.