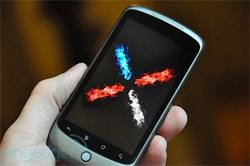 By the end of the week Google plans on rolling out the long awaited OTA for the Nexus One. Multi-touch will be included in this OTA.

Endgadget has stated that Google has leaked information the OTA which included and updated version of Google Maps that adds a dedicated night mode feature and Googles Goggles. Multi-touch will also be implemented in various parts of the phone; you will be able to use it in Gallery, Browser and Maps. Looks like Steve Job’s rant on Google did not go unnoticed. Thanks Stevie boy, the gloves are now coming off (hopefully). Oh and, the 3G issue will be addressed and other performance tweaks.

edit: Here’s a link to the Nexus One page with the information so it’s official  http://googlenexusoneboard.blogspot.com/2010/02/new-software-update-for-nexus-one.html