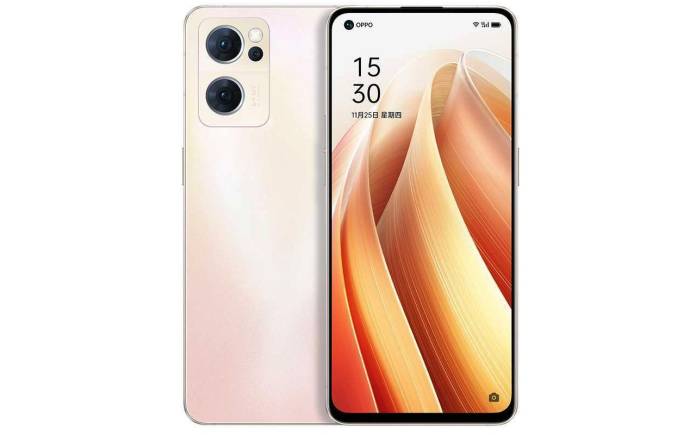 The next phone offering from OPPO will be the Reno7 series. The new phones are said to be announced in China, tomorrow, November 25. We have only seen teasers and some details that surfaced recently. Two variants will be released: the OPPO Reno7 and the OPPO Reno7 Pro. The regular model will run on Qualcomm’s Snapdragon 778G processor while the Pro will use Dimensity 1200 SoC. They are only mid-range devices but will already offer 5G connectivity plus up to 12GB of RAM and 128GB or 256GB built-in storage.

The OPPO Reno7’s triple rear camera system will consist of a 64MP main camera + 8MP ultra-wide lens + 2MP macro lens. The selfie shooter will be a 32MP Sony IMX709 camera. The phone will run on ColorOS 12. It will also come with Bluetooth 5.2, dual-band Wi-Fi with 5G, and 4500mAh battery with 65W fast charging support.

The main camera is 50MP Sony IMX 766 and is joined by an 8MP ultra-wide camera and 2MP macro lens. The 32MP Sony IMX709 selfie camera will be powerful. The camera bump is said to feature a notification LED.