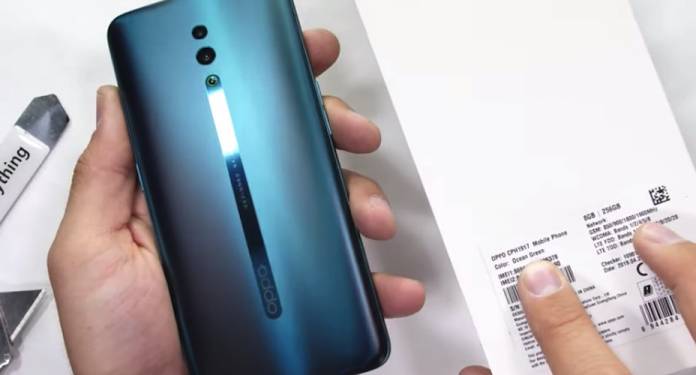 The Oppo Reno sub-brand and smartphone surfaced online in the first quarter of the year. We learned of the possible 5G variant and then a model was leaked in a video. The phone with a gum stick camera was teased before the official launch. It hit AnTuTu and TENAA earlier which meant it would be out in China. Of course, that’s expected because OPPO is a Chinese firm. The OPPO Reno finally debut with a shark fin-style selfie cam in April. It already has another sibling in the form of the OPPO Reno Z but it’s only now that Zack Nelson has tried and tested the smartphone.

As with standard Durability Tests, the OPPO Reno phone gets scratched, burned, and bent. Unlike other premium phones, this one only scratched at a level 3. It’s the usual level of plastic but yes, the screen was still covered by plastic. When the protective screen was removed, the display scratched at level 6 and with deeper grooves at level 7.

Scratching the phone on different sides and edges revealed that the device is like any other phone as the metal gets scratched. What we’re more interested in is the self-retracting phone camera. We can still see a headphone jack and a USB-C port.

There are different variants of the OPPO Reno but they all look almost the same. The specs differ in many aspects. The rear camera setup is covered by ceramic so it’s scratch-resistant.

The Oppo Reno boasts an optical under-screen fingerprint scanner that doesn’t easily scratch. The burn test aka flame test lasts 30 seconds before a residue appears. A white tint shows up since the screen is AMOLED. It doesn’t fully recover so the blemish remains.