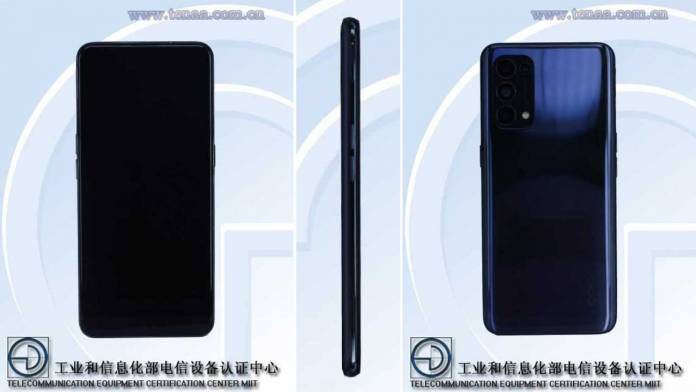 OPPO is expected to be flirting with a new smartphone, this has been made evident with the appearance of a device on TENAA. The phone with the model numbers PEGM00 / PEGT00 was spotted in the listing, which is expected to be the OPPO Reno 5. The certification reveals the complete specs list and we now know more about the device than we have in any previous information regarding the new OPPO phone.

The smartphone is likely to feature a 6.43-inch FHD+ OLED display touting a screen resolution of 1080 x 2400 pixels. The display boasts a 60Hz refresh rate and has a touch sampling rate of 180Hz. OPPO Reno 5 is going to have an in-display fingerprint sensor on the single punch-hole screen.

The phone measuring 159.1 x 7.34 x 7.9mm will weigh 172g and feature a 32-megapixel camera in the punch-hole cut out in the front for quality selfies. On the back, however, there will be a quad-camera setup comprising a 64MP main shooter alongside an 8MP, 2MP, and 2MP cameras (the specifics not available).

OPPO Reno 5 is expected to be powered by a 2.4Ghz octa-core processor, which is likely to be Qualcomm Snapdragon 765G, which is also found under the hood of the Reno 4. The phone is going to feature a 4,300mAh battery equipped with 65W flash charging tech.

The listing does not give out the price or any release date regarding the forthcoming phone. It is however evident that the OPPO Reno 5 will come in four color options – starry dream, aurora blue, moonlight black, and star wish red – there is also going to be a leather version of the phone.