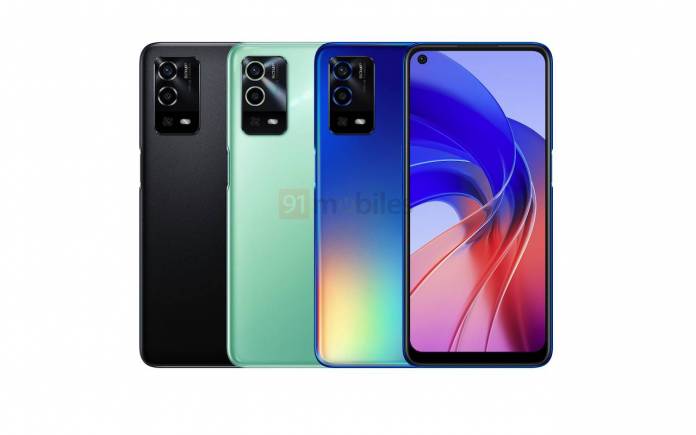 The OPPO A55 4G may be the next offering from the Chinese OEM. The phone’s render has just been unveiled although we believe it’s not the final and official design yet. It may be close to the final look but we won’t be surprised if it’s not the exact product design. The device shows a punch-hole camera and a side-mounted fingerprint sensor will still be a standard for this budget-friendly Android phone.

OPPO has already released the OPPO A55 in China earlier this 2021. A 4G model is in the works so the design should just be the same. There is no formal announcement yet but the product has already reached the NCC Taiwan.

An FCC certification has been given which means an impending launch. As per our source, it will be slightly different from the 5G version. This one will now come with a punch-hole cutout on the upper left part instead of a waterdrop notch for the selfie camera.

The OPPO A55 4G will also be out in different colors: Gradient Blue, Green, and Black. The power button doubles as a fingerprint sensor. It is placed on the right edge of the phone. On the left, there is a volume rocker.

When it comes to the imaging department, there is a triple camera setup headlined by a 50MP primary sensor, placed in a rectangular module. We can also look forward to the following specs and features although not confirmed: a 6.5-inch HD+ display, 720 x 1600 pixel resolution, standard 60Hz refresh rate, MediaTek Dimensity 700 SoC, 6GB RAM and 128GB storage, 5000mAh battery, and 18W fast-charging support. A microSD card will be present. OPPO A55 4G will run on Android 11 topped by ColorOS 11.