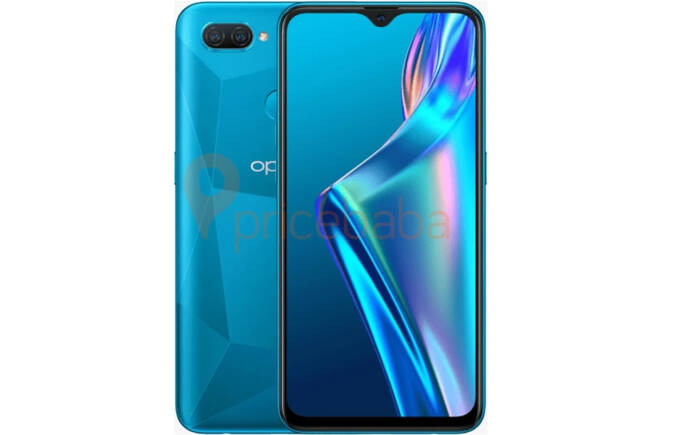 BBK Electronics owned OPPO caters to the mid-range smartphone market with the flagships like Find X2 Pro that compete against the reputed brands. Its value for money smartphones are fancied by consumers who don’t want very high-end specs and are on a budget. Keeping in mind the entry-level phone market – OPPO is slated to reveal a low-end smartphone dubbed A12. It would be safe to assume that the phone is a successor to the OPPO 11 released in October 2019.

According to tipster Ishan Agarwal, who has shared render images of the phone – it will feature a waterdrop notch display, rear-mounted fingerprint sensor, and a solid 4,230mAh battery. The 155.9 x 75.5 x 8.3mm A12 will weigh 165g and is rumored to have a 6.22-inch HD+ LCD touchscreen. As the pictures clearly show, the device will have a diamond pattern back.

It will be powered by MediaTek’s Helio P35 processor and ColorOS 6.1.2 operating system out of the box, which runs on Android 9 Pie. Sadly, no Android 10 out of the box if we go by the tip. The phone will have a dual-camera setup on the rear – a 13 MP f/2.2 primary shooter and a 2 MP depth sensor. There’s a 5 MP depth sensor f/2.0 selfie camera that resides inside the waterdrop notch.

OPPO A12 will come in two variants – 3GB RAM with 32 GB of internal storage and 4GB RAM, 64GB storage. No word on the expandable storage capability but we assume there’s going to be one. There’s no information regarding the pricing and availability yet. We though expect it to launch soon, given that its look is amid us. The A12 could be accompanied by OPPO A12e, again a budget handset with similar features to the A12 except that former would be powered by Snapdragon 450 processer, feature 3GB of RAM and 64GB expandable storage.