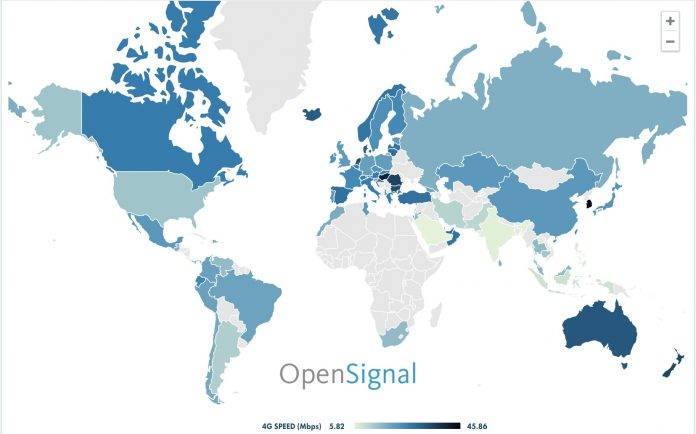 If you’ve been struggling with your data signal for the past few months, this report may be something that will annoy you or give you hope that things will become better (depending if you’re a half full or half empty person). According to OpenSignal, through the data collected from millions of 4G users, 3G is “receding into the background” and those countries that have advanced 4G connectivity are now approaching 50 Mpbs. Pretty soon, hopefully, we’ll all be living in a 4G world.

As to what country you should move to if what you want is LTE connectivity almost everywhere you go, then that would have to be South Korea. They just barely beat their neighbor, Japan, in terms of availability, with users being able to connect 95.7% of the time there. Lithuania, Hongkong, and the Netherlands round up the top 5, with the US only 10th at 81.3% availability. But when it comes to LTE speed, Singapore beat out South Korea, with its 45.9 Mbps connection. The latter was still a very close second, and Hungary, Romania, and New Zealand being the other countries in the top 5. And the US? Way, way, way below the table.

But their study has also shown that “speed doesn’t equate consistency” as shown by the fact that not all countries that performed well in both the speed and availability categories. Developing countries in particular may have given impressive speeds, but when it came to accessibility, they fell short. The global average speed for LTE connectivity is just 17.4 Mbps, even though a lot of countries went beyond the 20 Mpbs. But there are still a lot that had to work with 6 Mbps speeds so that brought the average down.

While it is still in various stage of development in different parts of the world, OpenSignal has seen that some countries have it more than 3G or 2G. Asia and Africa have seen first LTE networks opening in some of their developing countries. Suffice to say, it is gaining traction as the more popular connectivity available and by the next report from the company, we will hopefully see even more countries and faster speeds being added to the map.