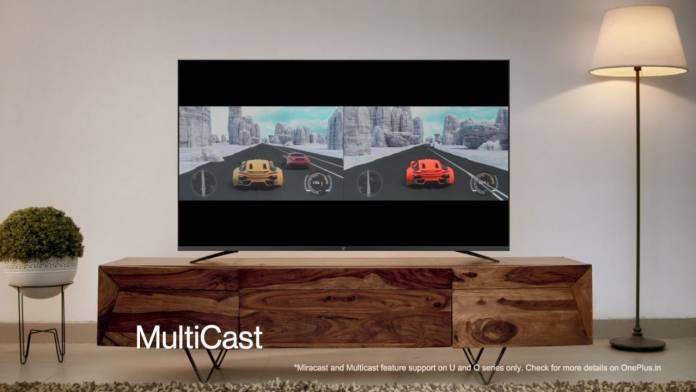 OnePlus may have started off with smartphones but the company has now expanded beyond that image and now has some interesting smart TV options in the market. The notable OnePlus TV Q and U series are in for some exciting new features with the release of OTA6 update. Scheduled to roll out over the air (OTA) sometime in November, the update will bring MultiCast, User Metrics, and Power-off Timer, amid other features, to the smart TVs.

OnePlus recently posted the report of the forthcoming OTA6 update and suggested features on its forums. The biggest feature in the suggested list is the MultiCast – an option for OnePlus U and Q series TV owners to cast multiple devices on to the big screen. Interestingly, the feature will let users cast up to four devices on to a single OnePlus TV.

According to OnePlus “This feature can help us with sheet comparison while working, enjoy multi-player gaming on one screen, and if you’re daring enough, even binge-watch several movies at a time.” The Chinese OEM believes this option that betters the possibility of Chromecast and others – that allows you to cast one screen to a bigger screen – will bring “change into our entertainment consumption.”

In addition to the MultiCast, the new OTA update will also include Power-off Timer (to let users set timer to turn the TV set off automatically) and User Metrics feature (that offer vital statistics like screen time and data usage – utility for binge-watchers). The update will also include My Videos feature (this comprises things like watchlist, viewing history and more).

From the My Videos page, users will be able to “resume the episode stopped a night ago, and easily catch up with shows and movies that were added to the watch list.” This new system update is expected to be available in November for OnePlus TV Q and U series.