We don’t really know much about the numbers of OnePlus year on year but today, we’re hearing some crucial information that gives us an idea about the future of the Chinese OEM. You see, OnePlus doesn’t announce how many phones it has sold the past year or quarter but we believe they’re a lot. The company won’t stay in the business and spend so much time and resources on marketing if it doesn’t have a market. This year, we may even hear more good news about OnePlus as more consumers are remembering the brand.

One firm that recently did an analysis, Counterpoint Research, said the mobile market in India grew by about ten percent and 19% in Q2 and annually, respectively. The growth is due to many Indians upgrading their smartphones to flagships. There’s also the fact OEMs and mobile carriers are offering other premium and deals from Trade-ins to Data bundle, EMI, and Cashbacks. These promos can be enticing enough that more people are buying phones left and right.

According to Counterpoint Research, Samsung has been surpassed for the first time in India. OnePlus was the reason and it’s mainly thanks to the OnePlus 6. The latest flagship phone has caught the attention of many consumers because of the premium specs and the price. Samsung has the Galaxy S9 and S9+ but those two are more expensive. Apple also saw a not so good second quarter. 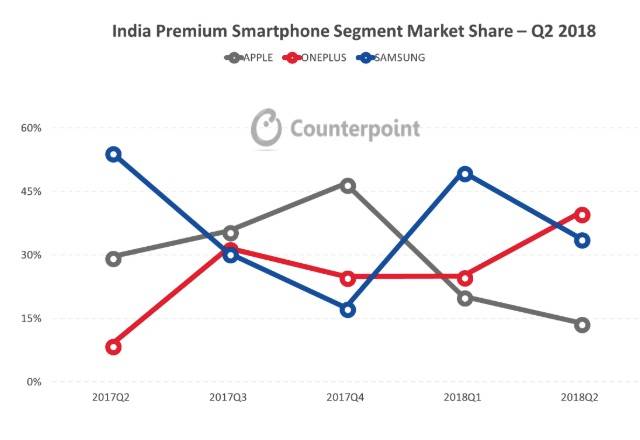 OnePlus has captured about 40% of the Indian mobile market, overtaking Samsung and Apple. Together, the three comprise about 88% of the total market, leaving the rest to other OEMs. The numbers are good but it was 95% in Q1 2018.