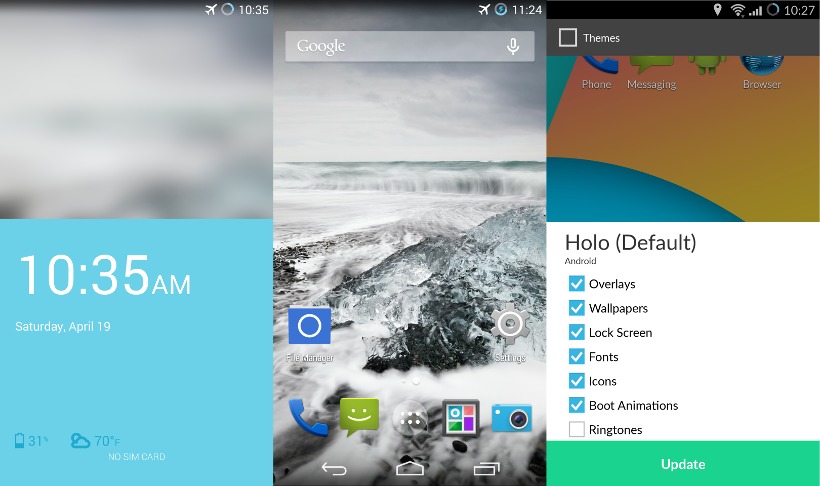 We’re just literally a few days away before OnePlus tries to make a big splash in the mobile industry and, of course, we’re still getting last minute entries into the leaks and teasers book. This time around, we’re seeing official previews of what is billed as a pre-production version of CyanogenMod 11S running on the OnePlus One, as well as some revelations about the hardware that will run it.

It has been no secret that OnePlus has been collaborating with Cyanogen, Inc. even while the latter was still working together with OPPO, from which OnePlus’ own founder and CEO came. It is also hardly surprising to learn that the version of CyanogenMod on the OnePlus One will have a distinct look and feel. We see here a mix of the usual CyanogenMod look, icons and all, as well as some OnePlus-specific features that sport a flatter and minimalist appearance, particularly the lockscreen. One difference with stock CyanogenMod is that CyanogenMod 11S seems to allow more fine-grained control over which theme elements are actually used, allowing users to combine bits and pieces of themes as they please. One particular detail that caused some amount of trepidation was one shot that showed the screen without any on-screen navigation buttons. The gallery was later updated to show a shot with the navigation buttons visible for all to see, but there is still some question as to whether OnePlus has something in mind, like, perhaps, a navigation panel that slides out when unused.

If the software has had you interested, then the hardware might get you disappointed, depending on how much credence you give this other half of today’s news. OnePlus’ PR has supposedly leaked out some press materials that give more details into the physical aspects of the smartphone, and it was looking strangely like the OPPO Find 5, a much older device announced in late 2012. The dimensions are practically the same and the screen is said to also be similar, which means a 5-inch 1080p display. This would contradict OnePlus’ own claims of creating an engineering wonder, squeezing a 5.5-inch screen into a 5-inch frame. That said, the source of the rumor does say it might not be true and that it could even be a red herring planted by OnePlus PR to increase the hype.