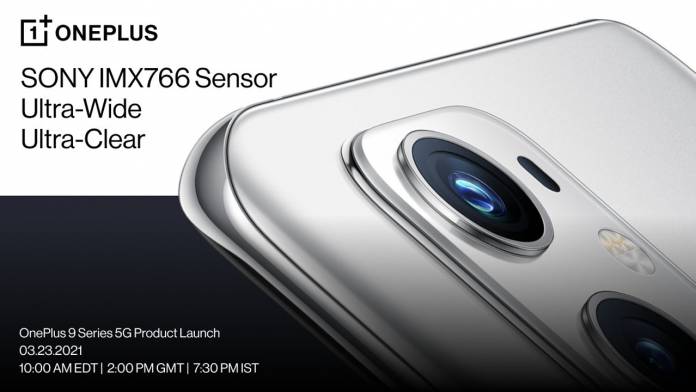 The launch date for the OnePlus 9 Series is now official for 23 March 2021, and predictably, information about the most anticipated phone of the year is trickling in. First, it was confirmed that the upcoming series will have the Hasselblad cameras – as a part of the three-year deal between the two brands – and now there is more confirmation coming in about the sensors to be used in the camera module.

OnePlus has now officially confirmed via tweets that the series will have the 50MP Sony IMX766 Ultra-wide camera sensor. That’s the same sensor on the recently launched Reno5 Pro+ and promises to elevate the phone’s photography a notch higher.

This comes at the back of the announcement of the 48MP Sony IMX789 sensor to be used as the primary shooter for the phone. It’ll have the dual native ISO, full-pixel Omni-directional autofocus, real-time HDR support, and the ability to record 4K video at 120 fps, as well as 8K videos at 30 fps.

One noticeable feature of the IMX789 sensor is its Digital Overlap HDR (DOL-HDR) technology for crisp shooting of moving objects as it removes ghosting. It comes with the freeform lens system having two cameras placed alongside two prisms directing the light at a 90-degree angle – thereby resulting in a wide panorama having 140-degree FoV.

Along with that the 8MP 3.3x OV08a10 telephoto lens and the 2MP GC02M1B monochrome lens have also been confirmed by OnePlus Club for the upcoming series. The front-facing 16MP Sony IMX471 selfie camera is going to up your selfie game too.

Whether the whole series will get all these cameras or only the OnePlus 9 Pro will have the bragging rights is to be seen. The OnePlus 9, however, could get some of these rear camera module sensors if not all.