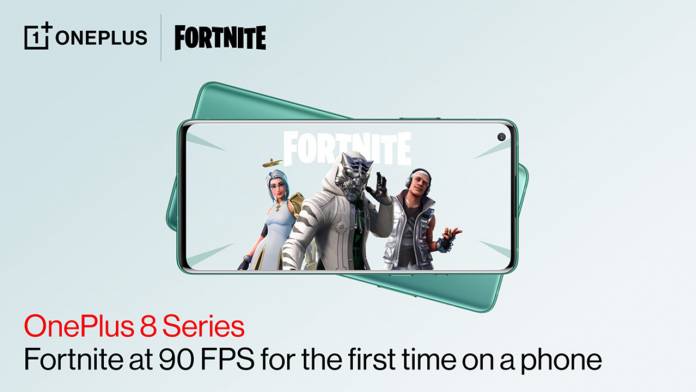 Epic Games has partnered with OnePlus to bring 90fps refresh rate to the Battle royal game Fortnite. This will be the first time Fortnite (or any other game) will run at this rate on a phone as it is generally just capable of running at 60fps maximum. So, this is going to be the best experience of playing Fortnite on mobile devices. Although the OnePlus 7 series phones also come with 90Hz refresh rate screen, the privilege is reserved for the new flagship devices only.

For gaming fanatics, this is good news as 90fps is visually more fluid and smoother than 60fps. It goes without saying that OnePlus 8 and 8 Pro users will fancy the Fortnite game over PUBG and Call of Duty mobile games since they only run on 60fps on phones. Given the decent battery of the phones, they should be able to take long sessions of 90Hz display setting for the Epic Games title.

It is worth mentioning that there is a caveat to this 90fps setting for Fortnite. With this setting, the game will run on low graphics. That said, it might be an initial limitation to see the battery drain or other hardware rendering data. Running on 90Hz setting with ultra-graphics can be a real battery drainer, so it might be for that reason, the graphics settings are locked on low for the 90fps mode.

According to the tweet by Epic Games, “The entire endeavor to bring 90 FPS to Fortnite on the OnePlus 8 took months of development.” They also mentioned that the feature will come to India initially and OnePlus users can download Fortnite via “One-touch” easy installation of the Epic Games app exclusively through Game Space.