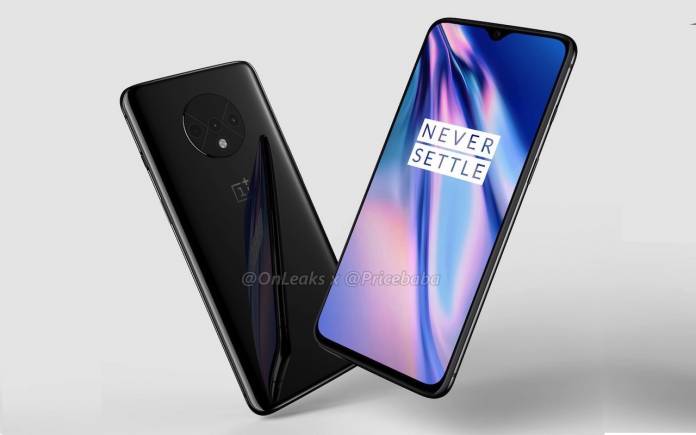 After the OnePlus 7 and before the OnePlus 8, the OnePlus 7T will make an appearance first. The T variant of the latest OnePlus flagship has been sighted last week with a round camera module. It was leaked online before the official launch. Not many information has been provided, just the idea of a round camera module. Today, we’re seeing several rendered images by who else–Steve Hemmerstoffer aka OnLeaks in partnership with Pricebaba. The set of photos clearly shows us every angle of the upcoming smartphone complete with a notch and that round camera setup.

The round camera module includes three rear shooters. We also learned the phone will have a special McLaren Senna Edition. We’re not sure about this but we’re looking forward to the OnePlus 7T and 7T Pro. We’re assuming there will be two because OnePlus brought two premium flagships earlier this year–the OnePlus 7 and OnePlus 7 Pro.

For this year, instead of a Q4 launch, OnePlus is believed to make the phones official this coming September 26. The pair is also expected to arrive with the OnePlus TV next month.

Pricebaba and OnLeaks have provided exclusive renders and a 360-degree video. The rear panel shows that circular camera bump. The cameras are laid out horizontally in one line. A dual-LED flash is placed below.

The OnePlus 7 only had dual cameras so you can say the OnePlus 7T will be more advanced in the area of imaging. OnePlus 7T is expected to be more of a glimpse ahead of the OnePlus 8. It appears to be curved at the back with probably a glass back cover. The OnePlus logo is still at the center.

At the front, there is still the waterdrop notch holding the selfie camera and an earpiece. Display size could be around 6.4 or 6.5-inches with dimensions of 161.2 x 74.5 x 8.3mm. We don’t see a headphone jack, just a USB Type-C port at the bottom together with the SIM card tray and a loudspeaker grill. The volume rocker is on the left while the power button is on the right edge.