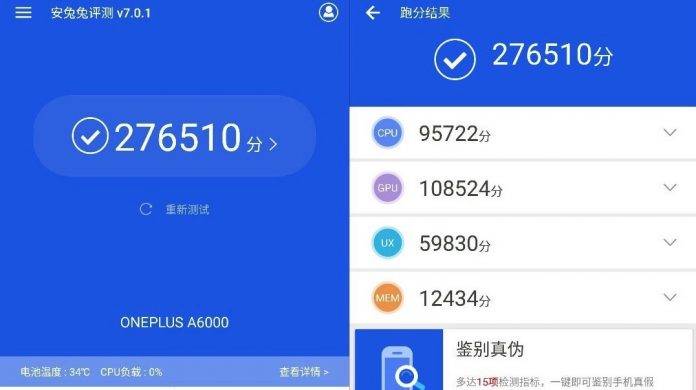 OnePlus is unusually quiet these days. It didn’t make an appearance at the Mobile World Congress 2018. Well, we never expected it would announce something. We’re just interested to know if the company had any plans to surprise the mobile industry. It’s just one of those wishful thinking kind-of-things but we know the brand will still continue to work on new flagship phones. After the OnePlus 5, let’s start anticipating for the OnePlus 6.

The device was recently spotted on AnTuTu with codename A6000 and a score of 276510. It’s the CPU score that confirms it will run on a Snapdragon 845 processor. This flagship beats the Xiaomi Mi Mix 2S which is yet to be unveiled as well. This is really impressive because this means OnePlus really lives out the “Never Settle” motto.

The OnePlus 6 is believed to be fast in performance by looking the at benchmark scores. Of course, we knew the numbers aren’t real indicators yet especially when the phone isn’t launched publically but they are good signs. The latest leak gives us an idea of how the phone’s home screen or UI will look.

Based on the information provided, the OnePlus 6 will have a 19:9 notched display. That’s slightly longer than the 18:9 aspect ratio which quickly became a trend last year. The notch can be a nice addition so there will be more screen real estate. The back may be available in where the dual cameras and fingerprint sensor are placed.

The OnePlus 6 is expected to arrive in June if we are to follow the Chinese OEM’s tradition in launching parties.