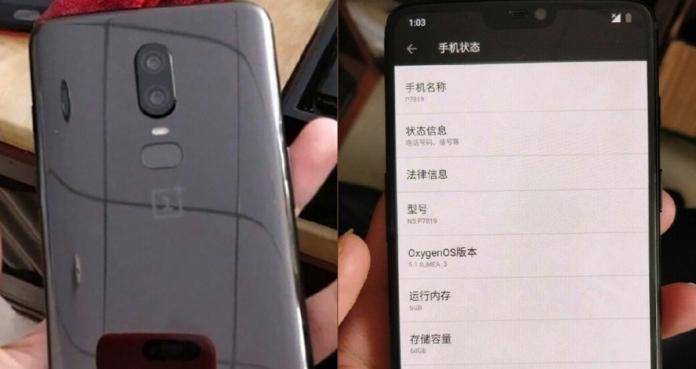 Over a year ago at around the same time, we started hearing about rumors and speculations about the OnePlus 5 until its official launch back in June. It’s time to have another round but this now we’re focusing on the next-gen OnePlus 6. We already said earlier this month the phone will have a 19:9 display and will be powered by a Snapdragon 845 processor. We’re not expecting any confirmation yet but we’re curious how the ‘6’ will be similar or different from the OnePlus 5.

A new leak tells us the OnePlus 6 may look like some phones that currently have a notch. So the next OnePlus device may have a notch. The rear side shows a dual camera placed in a protruding pill, LED flash, and a fingerprint reader. If you may remember that previous leak, the phone is said to run on 8GB RAM, Snapdragon 845 chipset, and max of 256GB storage. When talking about the camera, there might be 12MP + 20MP dual rear cams.

OnePlus is usually know for coming up with flagship phones that are not as expensive but the OnePlus 6 this year may be sold for $749. Nothing is final yet but this information places the OnePlus 6 alongside other flagship models recently introduced.

So if OnePlus can’t beat the mid-range or budget categories, it could try within the premium market. Well, we don’t doubt any OEM can do that but the OnePlus 6 looks like a combination of the iPhone X, HTC U11, and the Samsung Galaxy S9. Just check again those phones mentioned and see for yourself.

We know it can be a challenge for all OEMs to really make every model different from the ones that are already out but OnePlus should know better.