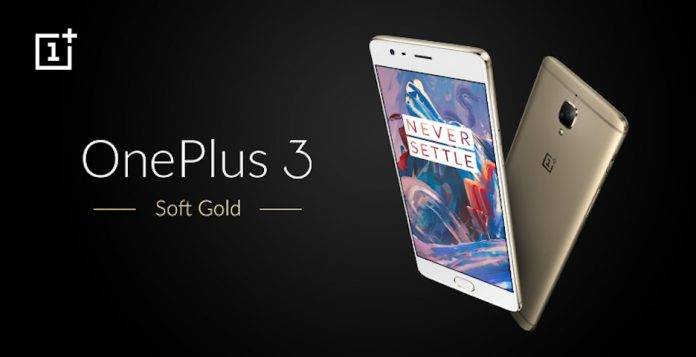 The OnePlus 3 has been called one of the best flagship Android devices currently available in the market, despite the fact that the OEM that crafted it is a relatively new player in the market and have less than 10 devices under their belt. India is one of their target markets to build a solid customer base in, and this October, they will be releasing a variant of their current flagship that may appeal to those who are fond of the golden color.

The Soft Gold variant of the OnePlus 3 will be available in the first week of October in India. The stylish and artistic design, or rather, color, owes its look from the Land of the Rising Sun, Japan. It has a “burnished craftsmanship” that will supposedly turn eyes wherever you go, as it is “subtle, sophisticated, and suave”. Other than the color, it will still have the same specs as the original version, and have features like the Dash Charge where you can charge your device for just 30 minutes and you get half a day’s power (of course depending on how often you use the phone).

Aside from the phone itself, you’ll also get all the other benefits that buying a OnePlus 3 will get you in India, same as the earlier Graphite variant of the phone. You’ll get Rs 500 worth of Amazon Kindle Credits to fill your ebook reading heart, 12 months of double data on both prepaid and postpaid connections if you’re with Idea Cellular, and 12 months of complimentary accidental damage protection from Servify.

The retail price of the OnePlus 3 Soft Gold variant is at Rs 27,999, which is the same as its easier version. The only advantage of course with having this one is that it’s prettier and more fashionable. It will be available by the first week of October.