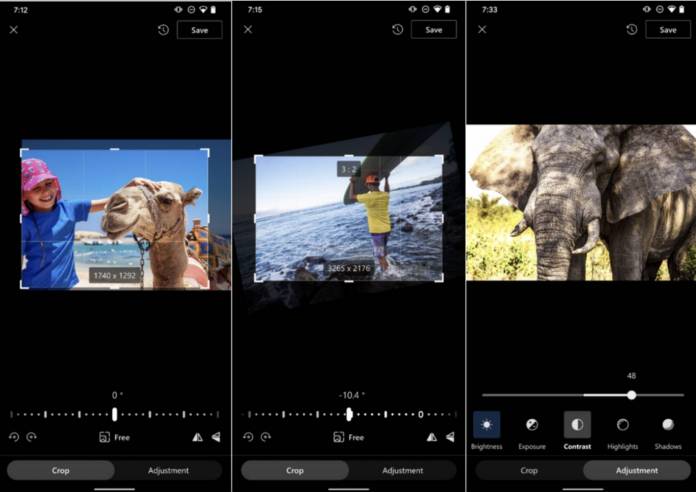 if you’re on the lookout for a new cloud service to hold your photos now that you won’t get “unlimited” storage in that famous photos app, it may be the perfect time to check out Microsoft’s OneDrive. The latest update brings several editing, viewing, and organizing features to make it easier to store and manage your photos and even add some of your personal style. Microsoft also says that this new photo experience on OneDrive still has the same “commitment to privacy” that the storage service always has.

The photo editing features on OneDrive aren’t something extraordinary. They’re basic tools that most apps have, like cropping, rotating and flipping, light and color adjustments, etc. The great thing with having these features on the app is that you don’t need a separate app to edit those photos that you’re already storing there. When you make edits, you get the option to save it as a new image or to overwrite the original image. The tools are currently limited to editing jpeg and PNG files only.

If you want to look at your photos or videos on a bigger screen, you can now cast it to your TV through Chromecast. All you have to do is connect your smartphone to a Chromecast-enabled device and you’ll see the cast icon on the upper right corner of your OneDrive home tab. Going through the media on your app will be mirrored on your TV or whatever device you’re casting to. You will also be able to filter photos from your Pictures folder or all the photos on your Drive.

You will also now be able to organize your photos either by the date it was uploaded, by month and year as well. But sometimes, you also need to organize them by the source where they came from. Photos aren’t always uploaded from your phone’s camera but also other sources like text messages, social media, screenshots, etc. You’ll see in the new setting a way to create folders based on their upload source.

These features may not make OneDrive as feature-packed as Google Photos but these are a big help towards adjusting to OneDrive in case you’re new to it. The update has started rolling out and should be available for OneDrive for Android and OneDrive for web.