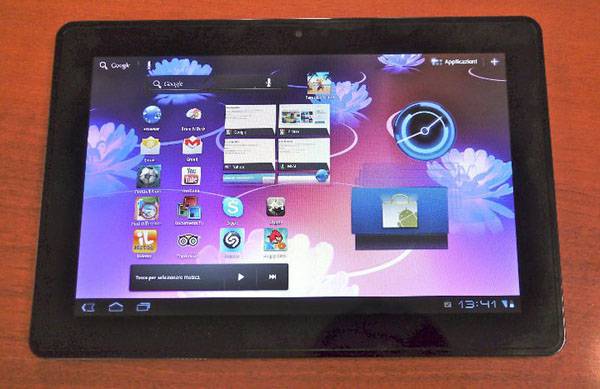 Our friends over at Notebook Italia were lucky enough to get some hands-on and photos of an upcoming Android 3.1 Honeycomb Tablet by Olivetti. The Olivetti Olipad 110 will be a slightly improved version of the Olipad 100 we mentioned here. The original Olipad was very similar to the G-Tablet by Viewsonic in terms of specs and design, as well as ran older versions of Android and had a TapnTap UI over the top. The new Olipad 110 has been working out and is now ready to play with the big boys.

The Olivetti Olipad 110 will feature all of those things we have grown to love and expect from a Honeycomb tablet. It will have a Nvidia Tegra 2 dual-core CPU, they bumped up the resolution to the expected 1280×800 for Honeycomb 3.1 and also will be shipping this with 16GB internal storage and 1GB RAM. It will also feature a 5MP camera on the rear and a 2MP on the front. The connectivity will also have a load of options, with micro USB, micro HDMI-Out, as well as a mini-USB slot.

It is not the thinnest device we have seen but it does look pretty nice with those stereo speakers and what looks to be some sort of 30pin dock connector on bottom, so we can assume some accessories for outputs or a dock and stand can be expected as well. So far we don’t have much information other than the pictures below but pricing is said to be set at 399 euros or around $549 if my calculations are correct and we may see this device as early as July.