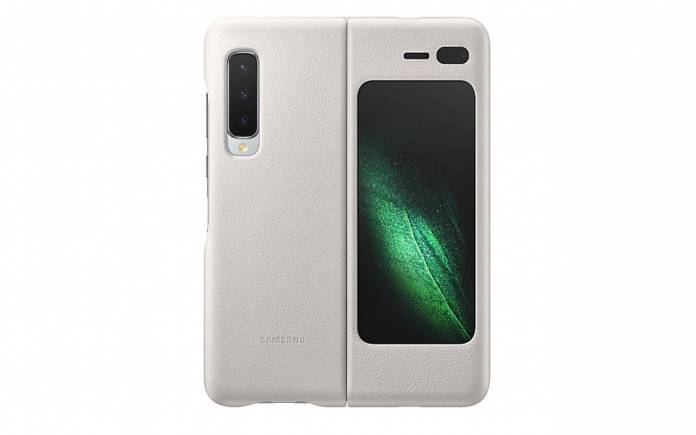 The Samsung Galaxy Fold, or at least, the early test units provided to some press people, may be in hot water right now for breaking but we’re still feeling positive about its future. The South Korean tech giant can still do something about it. We’ll be watching the whole story and update the Android community while we start searching for mobile accessories and protective cases and covers for the Samsung foldable phone. Roland Quandt, leakster extraordinaire, showed off some photos of the official Samsung Galaxy Fold Leather Cover.

Mr. Quandt (@rquandt) shared the images over on Twitter. He also mentioned the foldable phone leather cover will cost less than 100 Euros ($113).

The Samsung Galaxy Fold is one pricey smartphone. It’s a massive investment that you need to protect. How about a massive and sturdy phone case like this one.

The hundred dollar case may be expensive but not totally bad for a very pricey phone. The Samsung Galaxy Fold costs some $2,000 so the price of the accessory is nothing to the potential buyers.

We can’t wait to get our hands on the phone and the leather cover. The mobile accessory appears to be two separate covers–one for each display. The hinge remains uncovered but there are openings for the rear cameras, selfie shooter, and the earpiece.

The official phone case is made of leather. It doesn’t cover the bigger flexible display but the Samsung Galaxy Fold Leather Cover should be enough to protect the device from drops and scratches.

Only two colors are available: Black and White. We’re not sure if the tech giant will release the protective phone case in other colors. We’re only interested in its capability to feature an expensive Android phone.

Aside from the official Samsung Galaxy Fold leather phone case, we can expect other kinds will be released by the company. Other third-party accessory makers are also expected to bring to the market related products for the Samsung foldable phone.