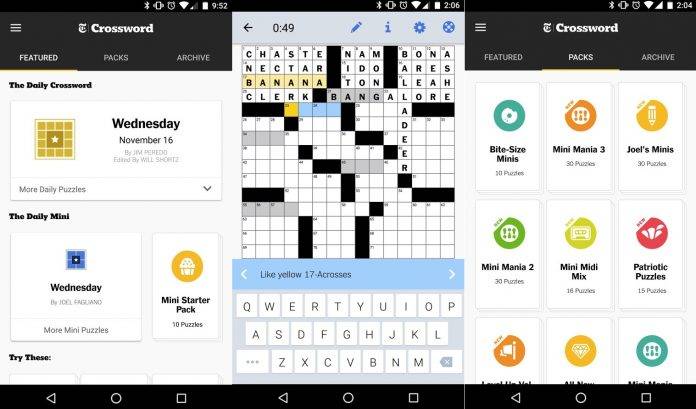 New York Times has always been known for taking risks in different areas. In the digital age, it has embraced mobile technology and joined the bandwagon by launching its own mobile app as early as year 2012. There’s also that Cardboard-supported NYT VR app that was released October last year. This time, The New York Times is bringing its crossword puzzles straight to your Android phones with the ‘NYTimes – Crossword’. It’s a new game that digitizes the same puzzles found in the daily printed newspaper.

Avid fans of NYT’s crossword games will love this app because you can play and solve those puzzles anytime, anywhere. However, you still need to subscribe to The Crossword for access. You can save your progress so don’t be forced to finish a puzzle in one sitting. If not on the app, you can also finish on the web at nytimes.com/crossword.

What’s more exciting, at least for the puzzle geeks, is that you have early access to the puzzle that will actually be released on the newspaper the next day. New puzzles are also available during weekends with the difficulty level increasing each day.

NYTimes – Crossword also features mini puzzles and puzzle packs. Subscribers are offered special benefits plus access to more puzzles–even the old and classic ones from the past 20 years. Annual fee is $#9.95 but you can try on a per month basis for only $6.95. That may be too much for a puzzle game but you know, there are word nerds out there willing to pay for crosswords that will challenge their minds.