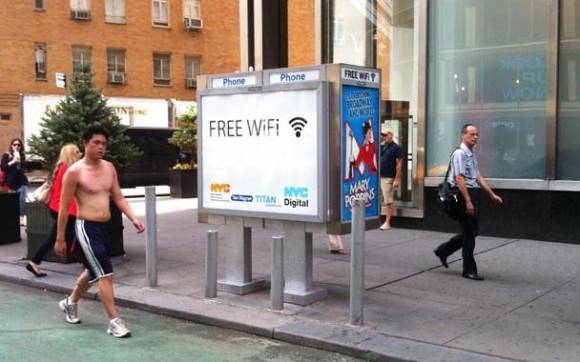 Today while browsing the interwebs I stumbled across a neat story from New York City. Since everyone these days walks around with a smartphone attached to their faces or hands, the need for a payphone is steadily declining. With payphone booths set up all across cities in the US we might as well make use out of them. In New York City they are doing exactly that — making them WiFi hotspots for all.

Now don’t mind the guy with his shirt off (photo-bombing) and instead focus on the payphone booths “Free WiFi.” Those phone kiosks all over the city still won’t get used much, but now they’ll actually serve a purpose again by providing all the Android smartphone and tablet users in the world some free speedy WiFi.

In a new pilot program NYC has turned 10 kiosks into free wireless access points. So far, only 10 payphones have been converted to 24/7 hotspots across Manhattan, Queens, and Brooklyn. The city however plans to fire up plenty more across town and eventually all 5 boroughs in the city. If you’re located in NYC here’s the short list:

The WiFi signal range is estimated to work around 100-200 ft, and you’ll know they offer free WiFi with the huge logo plastered on them as seen in the slightly disturbing image above. Reports suggest there are over 12,000 payphones throughout NYC and obviously many will remain the same, but we could see tons of free WiFi all over town soon. I’m hoping other cities across the U.S. follow suite. Get out those Android tablets and start enjoying them more in the city folks.