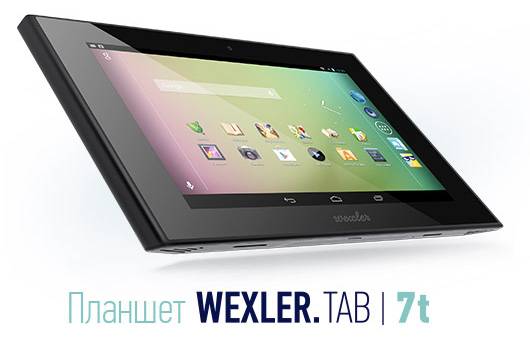 We often knock the lesser known device makers. These products often have an attractive looking price and on paper they may seem attractive. But that being the case, they are often not nearly as nice as the devices from the larger players. Simply put, the build quality often drops off once you enter the realm of budget priced devices. That being said though, things could soon change a little bit.

That change could be coming from one of the bigger names, NVIDIA. According to a report by Eldar Murtazin of Mobile-review, NVIDIA may be getting ready to begin white labeling device designs. Take for example the Wexler TAB 7t tablet. This particular tablet comes from a manufacturer that many have likely never heard of outside of Russia. Given that, it is a brand that many would likely ignore. This tablet however is rather similar to the Nexus 7. The exterior design is clearly not the same as the TAB 7t is landscape, however the internals are close.

Of course, this is just one example and there are some perks for both models here. For example, the TAB 7t is sporting HDMI, a microSD card slot and rear-facing camera. On the other hand, the Nexus 7 has one item that others cannot bring — speed of updates. The key here though, these smaller companies may soon be able to begin offering better quality devices with the help of NVIDIA. They may also be able to undercut items such as the Nexus 7 with the help of NVIDIA.

With NVIDIA offering the design and manufacturing, they would be able to allow others to rebrand the devices and sell them as their own. You see, with NVIDIA setting the specs and features, they would be able to lock down components at rates that these smaller, lesser-known manufacturers would never be able to do by themselves. Bottom line here, assuming NVIDIA follows this path, we may start seeing some tablets with an attractive set of specs and a price tag to match.