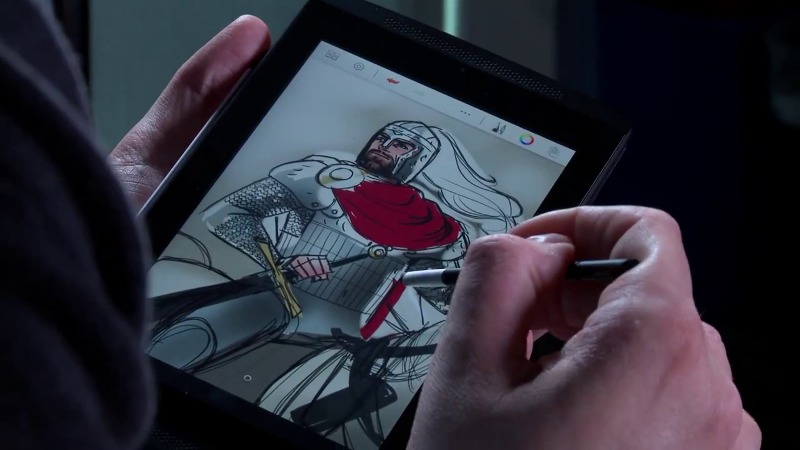 NVIDIA has just put up a new video that reminds us that it has a rather interesting device under its belt. Or rather, it has an interesting stylus that goes along with it: the DirectStylus pen for the Tegra Note 7.

A pressure-sensitive stylus for a tablet, or a smartphone for that matter, is nothing new, something that is right within Samsung’s court. Of course, that doesn’t mean that there isn’t any room for growth or innovation, like NVIDIA’s take on the problem. The graphics chip maker sells the DirectStylus as the first pressure-sensitive capacitive stylus in the market. This means that while it supports the same pressure sensitivity features similar to that of Wacom graphics tablet pens, it is still a capacitive stylus with that rubber stub at the end.

That last point might turn off those looking for professional art tools for tablets, but its precisely that nib, plus the proprietary algorithms that take run on the NVIDIA Tegra 4 beneath the glass, that actually makes all that magic possible. Granted, it might not be as precise as Samsung’s solution, but not having to license technology from Wacom probably saves NVIDIA a great deal. Another side effect of going their own way is that the NVIDIA Tegra Note can actually accept input from a variety of capacitive brushes in the market today and even a regular pencil, as the video below demonstrates.

The bad news is that, like Samsung’s S Pen, the NVIDIA DirectStylus is not a one-size-fits-all stylus and only works with the Tegra Note 7. Perhaps an even worse news is that, unlike the NVIDIA SHIELD, the company isn’t selling these tablets directly, since the Tegra Note is more of a reference design that others, like EVGA, can take, build, and sell under their own brand.