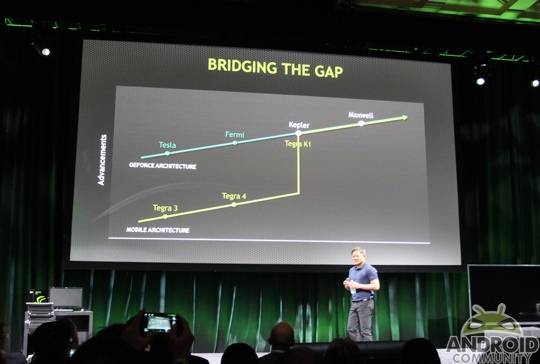 NVIDIA introduced the Tegra K1 last week during CES. While the Tegra K1 is following the Tegra 4, there is more to this than simply calling it a successor. Those looking back to CES will remember the Tegra K1 as the 192-core Super Chip. There was talk of the Tegra K1 being able to best those powering the current generation of top gaming consoles. But more to the point for today, it seems some early benchmarks have been revealed.

The benchmark report shows the NVIDIA Tegra K1 being used in the Lenovo ThinkVision 28, which for those unfamiliar, is a 28-inch 4K display with a resolution of 3840 x 2160. The display is also running Android and sitting with 2GB of RAM, 32GB of storage, a microSD memory card slot, Bluetooth and WiFi. Not to mention, the usual array of USB ports, HDMI ports, a microphone and webcam.

As you’ll see from the Futuremark 3DMark benchmarks sitting below, the ThinkVision 28 has topped the Google Nexus 5 with Snapdragon 800 and Apple iPhone 5s with Apple A7. Not as surprising, this is also sitting above the EVGA Tegra Note 7 which is powered by an NVIDIA Tegra 4 processor. 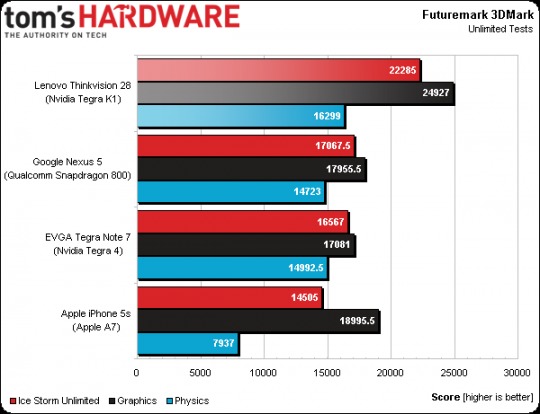 We are also seeing some benchmarks coming out of China. The other set is courtesy of MyDrivers and shows the Tegra K1 reference tablet running running at 60fps and 9% in a GFXBench. The specifics for the test are as follows; GFXBench 2.7 at 1920 x 1080 T-Rex HD Offscreen. As you’ll notice here, this has the Tegra K1 sitting rather close to the top. This test shows it besting a Haswell Core i5-4200U with HD Graphics 4400 (at 57fps), but also sitting well below the Intel Core i7-4700MQ with GeForce GT 740M graphics. That Core i7 scored at 112fps. 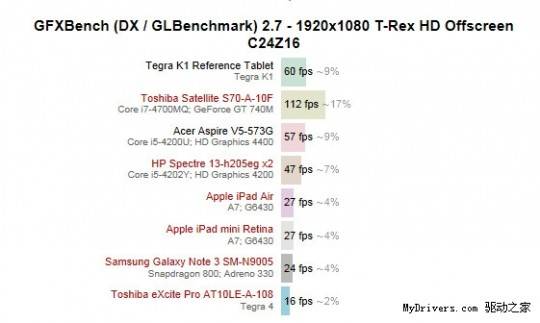 Anyway, as it stands, we do have to remember these are early benchmarks results. And on top of that, it is important to mention that benchmark scores often do not tell the entire picture. Either way though, with NVIDIA having just recently announced the Tegra K1 platform — this is something many are going to be looking to assign a number. Simply put, more benchmarks and more testing is likely to follow.