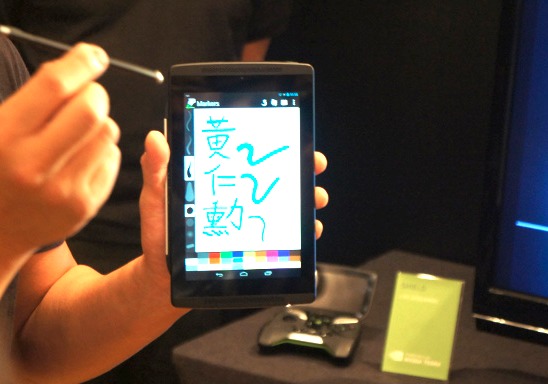 The palm pilot is something we never thought we’d see again, but here we are with the Samsung Galaxy Note series rising in popularity, and millions of users loving that stylus. This week at Computex the folks from NVIDIA have been showing off their new core-deep and integrated DirectStylus capability that’s been added to the Tegra 4. Which will in turn be a feature in upcoming quad-core T4 tablets and more.

Yes, the image above is an odd device being held by NVIDIA’s own CEO, and it looks like a 7-inch HTC One. We’ve reached out to NVIDIA for comments on the device, and will update when we learn more. That immediately caught our attention, but the news here isn’t the device, it’s the integrated experience being delivered by the Tegra 4 processor. Update: NVIDIA has confirmed the device is a reference Tegra 4 tablet to showcase the new features. No HTC Phablet, carry on folks.

With devices like the Note series having active digitizers and stylus support from Wacom, the demand for this type of option is growing by the day. Tablets are continuing to be a large part of daily activities, and being able to use a device with a pen and paper type experience appeals to many. NVIDIA’s DirectStylus feature looks to improve their options, and add the feature to all upcoming tablets. 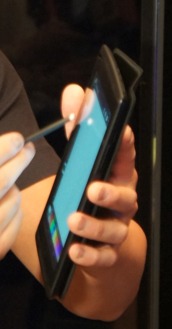 More details are available from NVIDIA’s Blog post, which explains what we can expect with this new feature. The important bit here being you won’t need expensive displays like the Note II and it’s pressure sensitive digitizer to enjoy the same experience. NVIDIA’s Tegra 4 powered tablets will do it at the core level, and as a result customers will get cheaper devices, yet more features.

This will be built in and then up to manufacturers to add or implement. Hopefully that new HP Slatebook x2 or the upcoming Toshiba slates announced today will all offer this next-gen tech. We’d love to give it a try and compare to Samsung’s offerings.