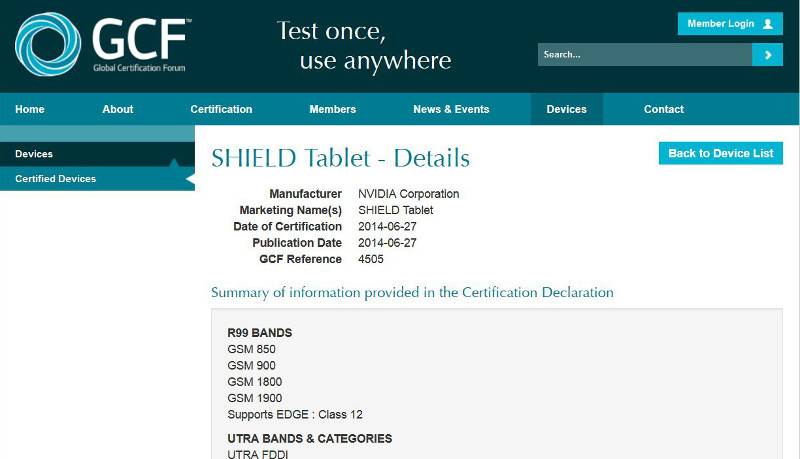 It seems that not only is the NVIDIA SHIELD Tablet a real thing, it could very well be coming soon. A certification registered at the Global Certification Forum or GCF reveals this device with 3G and 4G LTE support, hinting at the possibility that NVIDIA could announce the device soon.

The NVIDIA SHIELD Tablet is an interesting device, or rumor actually, because of the possibilities the name represents. On the one hand, it is clearly a tablet, a 7.9-inch one at that according to leaks. NVIDIA does already have a tablet, the Tegra Note, though the absence of the word “Note” suggests that this one will be different. In fact, the presence of the word “SHIELD” could imply that it might actually follow in the footsteps of the popular NVIDIA SHIELD handheld gaming console. That could also mean some GameStream fun!

The GCF certification doesn’t clue us in on any other technical information about this tablet aside from network support, but we have had a few leaks and rumors about it that gives us a better picture of the device. It will run on the Tegra K1, which sounds reasonable as it is NVIDIA’s current poster boy for mobile devices. The resolution won’t exactly be QHD but comes close at 2048×1536 pixels. There is also 2 GB of RAM and 16 GB of storage.

Beyond the specs, however, it is the final form factor that is a bit more interesting. The SHIELD brand suggests a gaming device, but tablets are rarely considered to be such. There are, however, rumors that the next SHIELD gaming device will come in a combination of gamepad and tablet, with the tablet part separate from the controller, which is still something a bit difficult, if not uncomfortable, to imagine. How that will play out in practice, we’ll just have to wait. According to rumors again, we might not have to wait that long, with a launch slated for 22 July.