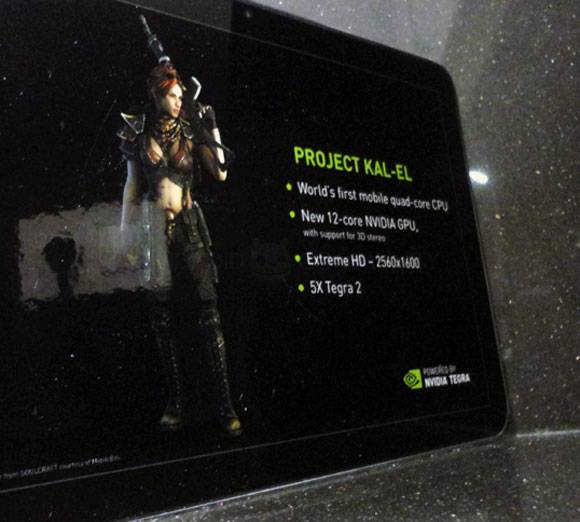 Let me preface this by noting that we’ve got a roadmap of NVIDIA’s future plans for speed and chipsets. Each one of these potential markers along the line from 2010 all the way down to 2014 is code-named after a superhero. Take care to remember that these are code-names and are NOT final names for the chips, nor are they in any way affiliated with Marvel or DC comics. That said, let it be known that NVIDIA revealed to our good friend Ben Bajarin some tasty tips such as the speeds NVIDIA hopes to deliver with future versions of their chipsets, starting at TEGRA 2 and working its way up to STARK. The first brand new chipset, Kal-El, is said to be delivering performance at 5X what it TEGRA 2 does today.

What the folks at NVIDIA showed Ben was a demo on what appeared to be an un-released yet complete tablet running Android. This demo showed first NVIDIA’s latest and greatest quad-core chip decoding a video stream at 1440p resolution, that being roughly double the resolution of 1080p, outputting video at 2560 x 1440 to a computer monitor set to 2560 x 1600.

The NVIDIA folks continued by showing a demonstration of a game which, sadly, Ben did not get permission to name, nor photograph, nor film due to the copyrights on the game not yet being completed. Ben does mention however that the game was both vibrant and visually stunning. While the tablet running TEGRA 2 was showing this game off at 18-20 FPS, the demo of the game on their new quad-core chipset was running strong at 50-55 FPS.

Another demo they ran at this NVIDIA demo was War Drum Studios’ Great Battles: Medieval, this time the quad-core Kal-El delivering scenes at right around 3x improved over the TEGRA 2. Ben did get to take a peek at this game with his camera, a video you’ll be able to see below this paragraph depicts this demo – note, if you don’t hear it, that the tablet running Kal-El is on the right, and is the only tablet in the frame for most of the video. Ben mentions that in addition to the impressiveness in the demo, the fact that War Drum Studios CEO Thomas Williamson had just gotten access to the quad-core development board less than 24 hours previous to this meeting, yet he was able to successfully port this game for tonight’s demonstration. Amazing and awesome.

The most important point Ben mentions is in the release, as NVIDIA executives stated that they were targeting August 2011 as a time frame for the availability of tablets that would be running Kal-El, with superphones close behind at the holiday season near the end of the year. This means that both quad-core tablets and quad-core phones might very well be available by the end of this year.