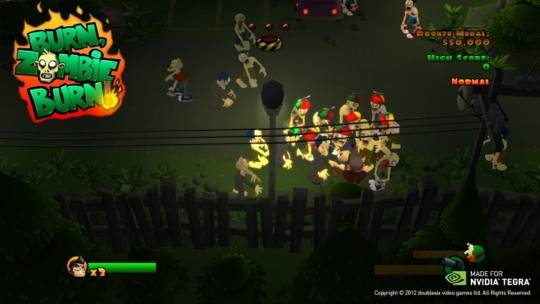 NVIDIA recently shared details on the Tegra 4 optimized version of Zombie Driver and as of today they have announced an additional five Tegra 4 optimized game titles. These latest five include Burn Zombie Burn, Carie: Blood Mansion, RPG CODEX, Dead on Arrival 2 and RU Golf. NVIDIA hasn’t offered anything in terms of a timeline of when these games can be expected to arrive — however without a release date for the Tegra 4, a release date for the games suddenly seems a bit less important.

At this point it is simply nice to know that NVIDIA will have Tegra 4 optimized games available at launch. With that, lets dive in with the first of the five, Burn Zombie Burn, which can be seen in the above image. This one comes by way of Tick Tock Games and is described as being fast-paced and with console-quality action. Basically, this one will have you fighting the zombies.

In Carie: Blood Mansion you will be guiding Carie through some “bloody battles” with “high-res textures, enhanced physics simulations and optimized fire and smoke effects.” Tegra users will even get a bonus in the form of an exclusive map. Next up we have RPG CODEX from Devclan and Playbean. This one will have you fighting “monstrous enemies in search of an ancient document after a war in heaven.” Or perhaps key here, it was said that the “already impressive graphics get a console-like boost with the real-time dynamic shadows and HDR lighting.”

Next up is Dead on Arrival 2 which comes by way of N3V Games. This is a first time on mobile for this game and users can expect custom built blasters as well as “high-resolution models and PhysX, for full-bore map destruction and even bigger explosions.” Finally, we have RU Golf from Nutgee. This one is a follow-up to the Tegra 3 optimized version that we saw last year and will bring goodies to include “dynamic specular lighting, soft shadows, and bloom and lens flare effects.”